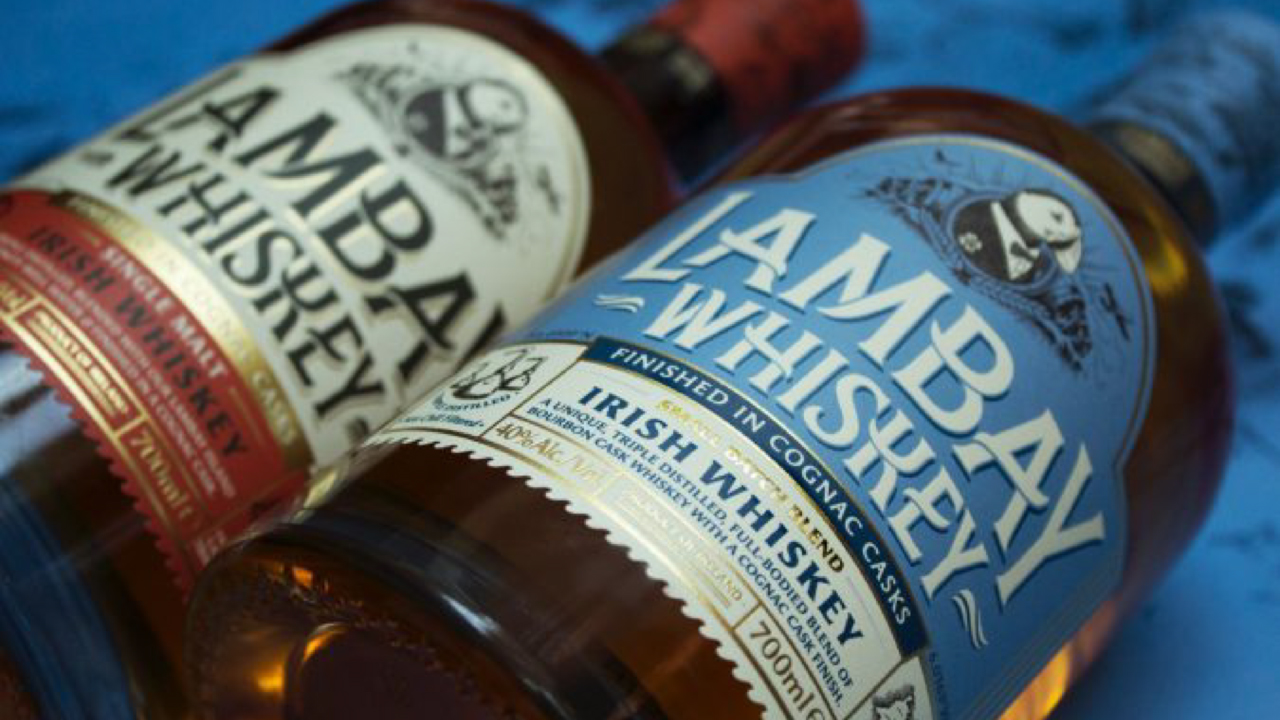 Two miles off the coast of Ireland lies Lambay Island. It’s known for its diverse flora and fauna, which includes over 120 types of birds, wild deer, grey seals as well as a colony of red-necked wallabies. It’s also the home of Lambay Whiskey, a young brand with a storied history and an extremely bright future.

“The story of Lambay Whiskey is a collaboration between two great family houses, who both have really strong legacies and heritage. The first being the Baring family, who had family links to the infamous Baring Bank legacy,” explains Lambay’s Global Brand Ambassador Sabine Sheehan. The other is the Camus family of the iconic independent Cognac house. Lambay Irish Whiskey Company is an independent bottler and blending company with future plans to build a microdistillery on Lambay island. But before we get to the Whiskey, we have to look back a bit further.

Like all good stories, Lambay’s begins with a scandalous romance. Cecil Baring, a merchant banker from Tuxedo Park, New York, fell in love with Maude Lorillard, a divorcee and heir to the Lorillard Tobacco fortune. Being the early 1900s, this ruffled more than a few feathers and it wasn’t long before the couple left New York for the more open minds of Paris. Eventually, they stumbled across an advertisement for an island off the coast of Dublin, and they bought it for £5,000.

At the time, Lambay wasn’t full of creature comforts. Instead, Cecil and Maude dedicated 30 years of their lives to creating what is their legacy today. Alexander Baring, the seventh generation Lord Revelstoke, now lives on the privat island. He partnered with Cyril Camus, the fifth generation President of Camus Cognac, to create Lambay Whiskey.

To this day, no electricity from the mainland runs to the island. Everything is wind generated. The current Baring family members live there with domestic farm animals (horses, cows, chickens, etc.), the previously mentioned varieties of seabirds (which includes Puffins, the logo of Lambay Whiskey) and red-necked wallabies. Of course, there are crabs, fish, kelp and all the sorts of marine life you would expect from an island in the Irish Sea, which plays an intimate role in the maturation of the Whiskey.

Lambay launched its first Irish Whiskey in 2018 and just two years later it’s in over 35 global markets. That says something about the quality of the product and the minds behind it. Lambay Irish Whiskey Company is made up of just five people at the moment, and Sabine is more passionate about Irish Whiskey and possesses more knowledge of the spirits world than really anyone has a right to.

This knowledge spreads from current macroeconomic factors governing things like cask cost to the effects of phytoplankton on oxygen molecules to the fact that “Ireland invented Whisk(e)y,” a hotly debated question that is also likely to ruffle some feathers.

Lambay Whiskey uses hand-selected Cognac casks made from very porous French oak. “Cognac was the preferred barrel of choice to age Whiskey, long before Bourbon,” explains Sabine. As it turns out, the only reason Bourbon barrels became so popular is because of the evolution of the technical file for American whiskey and the fact they were much cheaper. In the U.S. by law, new barrels are used each time you age a new Bourbon. That means there were a lot of dust-gathering Bourbon barrels around America seeking second homes and the Irish (and Scots) took the opportunity.

Cognac casks are just one part of what makes Lambay Whiskey unique, however. Another is the island, which is affected by the same gulf stream flow as Scotland’s Islay region.

“The north east of Ireland is known for being one of the most concentrated areas for sea spray aerosols in Europe,” explains Sabine. “These particles deliver an atmosphere that is high in negative oxygen ions. These ions full of lipids from the rich seaweed, what we call phytoplankton, in the Irish Sea, in turn release this really pure oxygen into the air. It’s concentrated with iodine, components that aid in the wood interaction and influence the specific taste.” Unlike the Islay Whiskies, which are well known for their peat, Lambay looks to create Whiskeys known for their salty, maritime quality, but all are presently unpeated.

Lambay Whiskey keeps their Whiskeys in a bonded warehouse on the island’s western shore. In there, they have their Single Malt casks that they’ve laid down since early 2017 and “they’ve just been sleeping in the traditional Cognac cask style, on their sides,” says Sabine. To note, in Ireland Whiskey is usually aged vertically.

The environment is maritime with high levels of sea salt and iodine, and because the wood is porous, it’s natural to expect some amount of external absorption. This has such an impact on the overall products that the ones resting on the wall nearest to the sea “have much denser levels of salinity than those that are placed at the back of the warehouse.” Blend the ones from the Irish Sea side of the warehouse with those in the back that maintain the Cognac cask flavors of violets and dried fruits, and you get typicity of flavor profiles found in the brand’s Single Malt.

Lambay makes four Whiskeys as of the moment, and Sabine took me through the Small Batch Blend and the Single Malt.

The Small Batch Blend is what she calls “a daytime Whiskey.” It possesses a lightness and softness in the palate that makes it easy to drink. Straw and yellow in color, floral and citrus aromas appear on the nose, along with notes of orange peel and pear. It’s not an age statement Whiskey, it’s all about the blend, which is about 70% grain and 30% malt. The Whiskey is around 4 to 5 years old and is Bourbon cask matured. The cognac cask finish here is short to allow a hint of the cognac spice to establish. The goal with this Whiskey is to “recruit Cognac drinkers,” while at the same time appeal to the U.S. consumer. It’s an easy-going Whiskey that’s a great base for cocktails.

The Single Malt, meanwhile, is much deeper in flavor and one of finer examples of Irish Whiskey I’ve had the opportunity to try. “Our single malt distillates is uniquely suited to be paired with a Cognac cask finish because malted barley, a pure malt, absorbs a lot more density and complexity of the cask,” explains Sabine. That basically means they can let it mature for much longer and really explore the depth of complexity they are looking for in the profile.

Lambay’s first offering of Single Malt won’t be around for much longer. Unintentionally, the Whiskey turned out to be a limited release because it was so successful that the batch of aged single malt they originally bought for the Whiskey has now come to its end. So if you want to get your hands on some, it’s best to move quickly.

In the future, Lambay will be  experimenting with different maturations and maritime exposures. The impact of the sea on the barrel will only be investigated further, and they’ve already laid down some special casks.

The future is bright at Lambay. Unlike many distilleries that see success and immediately build colossal visitor centers, Lambay will never be a place where tourists are brought by the bus (or boat) load. As it says on the back of every bottle, visits to Lambay are by invitation only. There are no roads, no footpaths, it’s raw and pure.

The visitor experiences that Lambay offers are among the most special and exclusive to be found anywhere. They bring small groups of 12 over, all they can fit on one boat, and give 90 minute to two hour experiences. These include a tour of the castle, learning about the story/love affair that started the history, and then there’s a masterclass in Irish Whisky and Cognac, followed by a private visit to the Sea Cask room. There are upgrades for higher incentive-type customers or corporate customers and they can actually stay over for a night. They can do full dinners on the island and you can bring your own chef. They’ve done off-grid mentorship type programs in foraging, yoga retreats, really there are a vast array of options. These are the type of options that only Lambay Whiskey can combine, thanks to their unique location on an island in the Irish Sea.

One last thing, as mentioned, the puffin lives on the island of Lambay. It’s the symbol of the Irish Whiskey brand and that’s because “He’s eccentric, adventurous, wild at heart, and tends to follow his nose wherever it goes,” says Sabine. It’s a tactic that has certainly been working for Lambay so far and one we’re certain will continue to find success in the future.