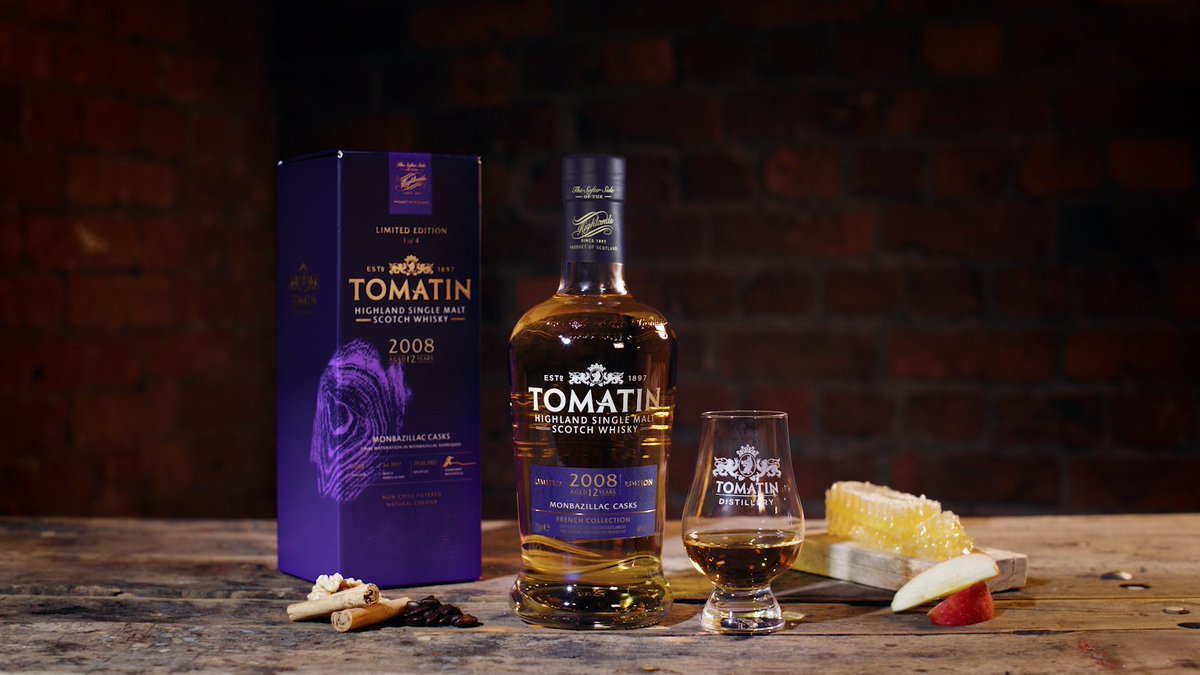 Tomatin Distillery has announced the launch of the French Collection, a four-part limited release series, 12 years in the making. The French Collection is a series of whiskies exhibiting the unique influence imparted by different French wine and spirits casks, hand-selected for the maturation process.

The Scotch, distilled in 2008, began its maturation in traditional Scotch Whisky oak casks before being moved into Monbazillac, Sauternes, Rivesaltes and Cognac casks for the final stage of the process, resulting in a collection of four unique expressions.

To celebrate the launch of The French Collection and to complement the liquid on the lip’s moment alongside each edition, an immersive four-part content series has been launched on the Tomatin website. Stunning visuals, alongside an innovative soundboard using ambisonics, will transport taudiences to the origins of each product, through binaural sound – for the optimum experience, listeners are encouraged to enjoy through headphones. Each piece of content will be unveiled in conjunction with product availability, and has been designed for consumers to pair with their purchase, allowing the drinker to lose themselves in the world, and story, of each individual edition that makes up the Tomatin French Collection.

“The French Collection is a great example of Tomatin’s dedication to craft and excellence, with each expression showcasing how respective finishing cask affects the original spirit – a concept Tomatin championed in the Cuatro series released in 2014, which was very well received,” said Graham Eunson, Master Distiller at Tomatin. “We have produced four remarkable expressions which will appeal to not only whisky enthusiasts and collectors alike, but also a wider audience. On top of this, we are also very excited for consumers to be able to experience each expression with the ambisonic content series launched today.”

Edition 1 Of 4: The Monbazillac Edition

Distilled on April 25, 2008, the Monbazillac aroma dances between notes of dark, maple syrup and intense espresso, balanced with cinnamon baked apples. On the palate, there is a sweet cereal flavour combined with sweet milk chocolate and honeycomb ahead of subtle spices and emerging nutty flavours. The finish is rich with walnut and maple syrup.

Edition 2 Of 4: The Sauternes Edition

Distilled on September 19, 2008, the Sauternes brings a burst of peach and apricot on the nose, calmed by rich Manuka honey. The sweet honey continues on the palate accompanied by coconut and ginger. The finish is wonderfully sweet and fresh with a syrupy mouthfeel indicative of the Sauternes wine that once occupied the cask.

Edition 3 Of 4: The Rivesaltes Edition

Also distilled on September 19, 2008, the Rivesaltes marries our characteristic fresh fruit notes incredibly well with the sweet nutty flavours for which Rivesaltes wine is known. Contrasting sweet and bitter flavours dominate the palate, held together by an underlying barley aroma. The finish is velvety with the flavours from the palate lingering for some time.

All 3 wine finishes were moved to wine casks for final maturation in July 2017.

Edition 4 Of 4: The Cognac Edition

Edition 4 of the French Collection will launch in the second half of 2021, to complete the series.

The Monbazillac, Sauternes and Rivesaltes Editions (1-3) will retail for around £65 ($90 USD) and are currently available for purchase. Edition 4 of the French Collection, the Cognac Edition, will launch later this year, to complete the series.

The French Collection will be available to purchase through specialist whisky retailers worldwide and directly from the Tomatin shop.