What’s really in a canned cocktail? Volley Delivers Transparency To An Opaque World 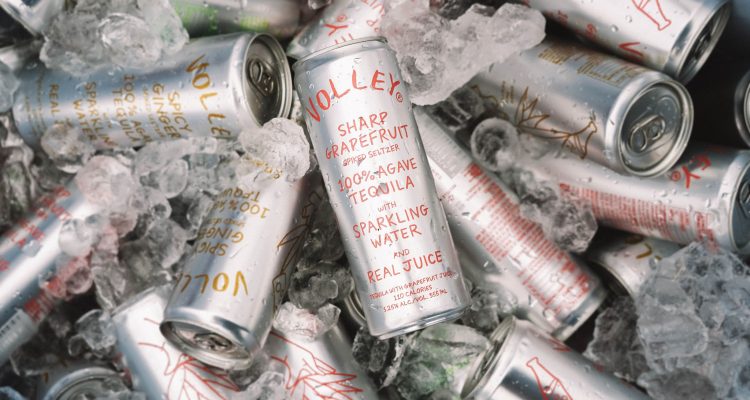 What’s really in a canned cocktail? It’s a question we’ve all been thinking about. Some sort of base spirit, “natural flavors” and carbonation, that’s about it, right? But what kind of base spirit is used? And what are “natural flavors?” That’s what Chris Wirth and Camila Soriano were wondering as they looked for a “healthier alternative” when it came to imbibing.

Chris and Camila are the minds behind Volley, a canned cocktail/hard seltzer brand that looks to bring transparency to the muddy waters of the ready-to-drink world. It all began when Camila started reading The Dorito Effect, which is “basically about what’s in our food,” she explains. “I was very disillusioned after reading it. It talks about all these natural flavors and why a Dorito is orange and tastes kind of like cheese and we don’t even know what it’s made with.”

Quickly, Camila realized that everything we consume has these so-called “natural flavors.” Afterall, it’s the “fourth most common ingredient in food,” she explains. “We can’t get a hold on what’s actually in a natural flavor, they are all proprietary recipes. That kind of angered me because it kind of violates the integrity of the word ‘natural.’”

Due to some sort of Jungian synchronicity, Camila’s outrage happened to coincide with the rise of hard seltzers and as Chris and she were searching for a “healthier alternative of what we wanted to drink,” which they thought would be these light and refreshing canned cocktails. But after digging a bit deeper, they began to wonder, “what’s really in a seltzer? What’s the alcohol base?” Eventually, they “found out it was from fermented cane sugar,” explains Camila, which only raised more questions. And, of course, “they all use natural flavors.”

”That was the lightbulb moment,” Camila notes. Both Chris and Camila are Tequila drinkers and they started wondering, “Where is the drink out there that is our go-to? That is cleaner, feels more refreshing, and is made with clean ingredients?”

Chris immediately saw an opening in the market. “There’s a big opportunity here just because there’s not anything catered towards the person that really wants to know what’s in the drink, who reads labels when they go grocery shopping,” he tells me. “The ironic thing for alcohol is you don’t need to list ingredients or nutritional facts. There’s that gap. That’s when we said, ‘let’s make the product we would drink.’ A product that says what’s in it on the front and on the back and just builds that transparency and trust with the consumer.”

Chris and Camila are not new to the beverage industry. For the past eight years, they’ve run the American Cocktail Company. “We’ve made over 80 different products, whether for us or other companies,” says Chris. But why a Tequila-based hard seltzer rather than vodka or something else?

As it turns out, Camila has always been a Tequila drinker and over time Chris caught on. In another stroke of luck, Tequila happens to be what’s “recommended by lots of nutritionists if you were to choose an alcohol,” explains Camila. “We thought it would be a good fit if you were looking for something more transparent and healthier, for the lack of a better term.” Chris adds, “The fact that we liked Tequila was one part of it, but also we thought that if the end goal was to make the clean hard seltzer, we needed to have the cleanest alcohol base, and Tequila turns out to usually have less calories than Vodka, so it came to be the solution.” Pour on the fact that “next day you’re not in as much pain,” and they knew they were on to something.

One of the main differences with Volley from other canned cocktails and hard seltzers is that Chris and Camila have a hand in every part of the process, and have done so from the start. Chris got trained out of the CRT Regulatory Agency out of Mexico in the manufacturing of Tequila, so that he would have a better understanding how the product is actually made.

When choosing a base Tequila for their new idea, Chris headed down to Mexico to “visit a bunch of different distilleries and taste the Tequila they were making to land on the smooth Tequila profile,” he elucidates. “The goal was for the profile not to be too agave forward. It was supposed to be sitting in the background so you could just enjoy a refreshing seltzer and there happens to be a little 5.2% alcohol in there.

“So I went down there and tasted about 15 different blanco Tequilas and brought them all into one tasting. I dropped into some of the big name brands, Don Julio, Herradura, Patron, and said, ‘let me pick out two that are the smoothest out of all these 15.’ One of them was sure enough Don Julio Blanco, which is a great product, and the second was an exclusive private label Tequila that is now the base for Volley. So at its core, Volley is a really premium Tequila base that we’re really proud of and we wanted to showcase.”

Another way Volley stands out is in how they get their fruit flavors into the can. Rather than using concentrated fruit juice, they actually use the real thing. As Camila explains, “There is no secret. It’s literally squeezed juice in there, so if you squeeze a lime, if you blended a mango because we use mango puree, juiced fresh-pressed ginger, or juiced a grapefruit, that’s actually what’s in there.” It’s a difference you know from the first sip. “You can taste a real fruit versus a lab concocted grapefruit,” she reminds me.

The process is fairly simple, they take the Tequila from the distiller to their solar-powered canning facility where they combine it with the juice. They source their limes and mangoes from Mexico, their grapefruit from Texas (the state fruit), and their ginger from Peru, which really does make a difference, “Most ginger in the U.S. comes from China,” explains Chris. “We feel that Peruvian ginger has a spicier profile, it has a brighter color as well.” Of the four current Volley flavors, it is the ginger that really takes you by surprise, and it’s clearly because of Chris’ and Camila’s mindful approach to their seltzers.

For juice, they’re using “the real thing that’s been pressed at the farm and frozen,” explains Chris. “It’s organic juice not from concentrate and that’s a big part of what the taste differential is.”

Thanks to Chris’ and Camila’s thoughtful approach and willingness to take part in every step of the production process, their hard seltzers have managed to stand out in a crowd filled with major brands and celebrities. With its real fruit, high quality Tequila, and mindful approach, Volley has given transparency to one of the murkier areas of the spirits world and gives true insight into what’s really in a canned cocktail. Best of all, it’s a result you can taste.