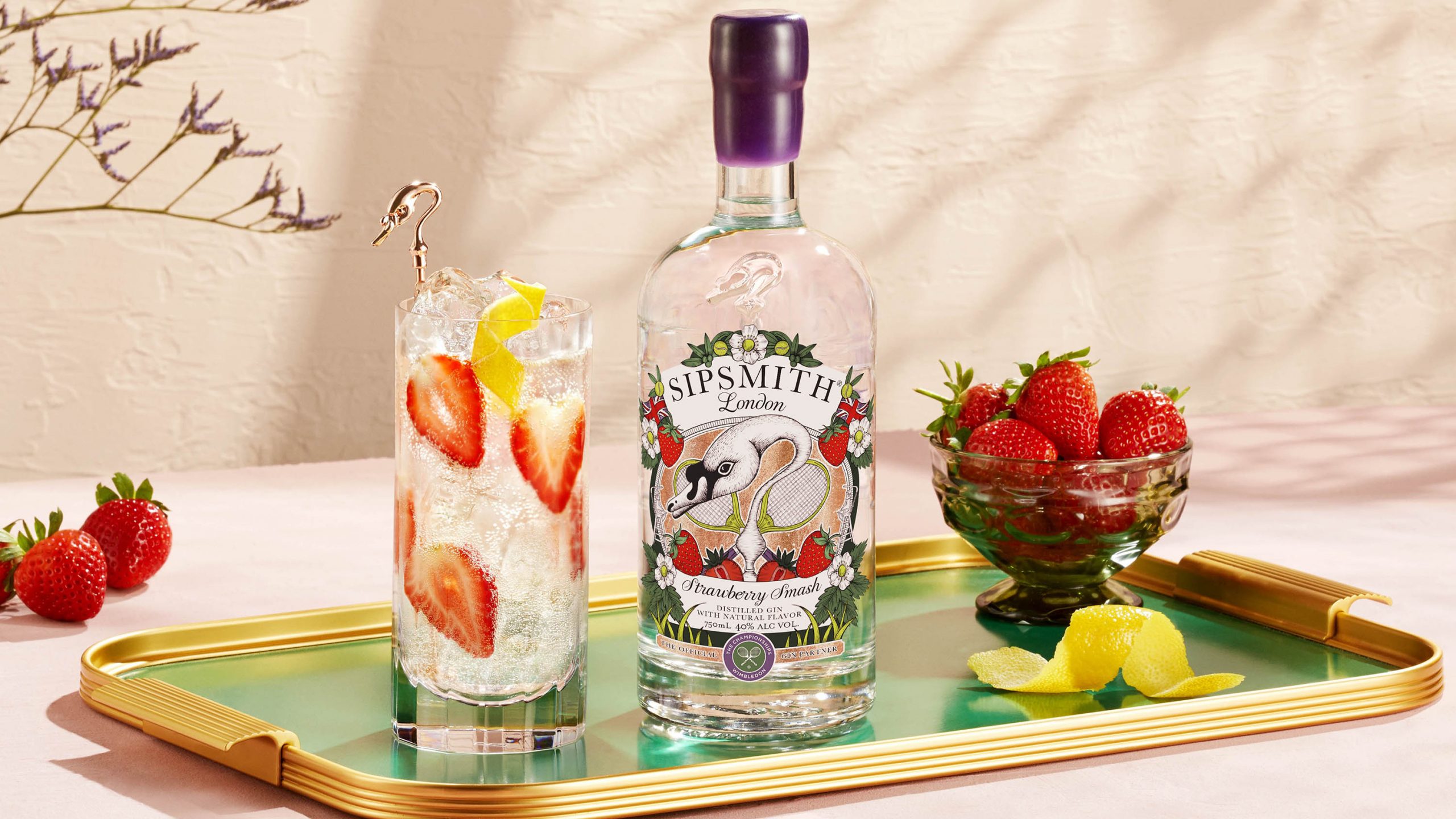 Sipsmith is now the Official Gin Partner of Wimbledon, which makes sense on basically every level. Both gin and tennis take their basis from mainland Europe–gin from Holland’s jenever and tennis from France’s jeu de paume–but both were perfected and born into their modern form in Britain. Similarly, Sipsmith and Wimbledon have taken their perspective concentrations to an even higher level, and, as Master Distiller Jared Brown explains it, that’s because both hold themselves to an “uncompromising standard” of excellence.

There is nothing more iconic to Wimblebon than strawberries and cream, so to celebrate this joint “commitment to excellence and tradition,” Sipsmith has unveiled Strawberry Smash gin. It’s the London-based brand’s way of incorporating the tournament into its product in a meaningful way.

In this special Wimbledon edition of Bottle Breakdown, we sat down with Jared Brown to discuss the brand’s partnership with the grass court tennis championships, find out how to spend the perfect day at the All England Club, and learn what goes into each bottle.

Spirited Zine: Sipsmith is now the Official Gin Partner of Wimbledon. How did the partnership come about? Who approached who?

Jared Brown: We built Sipsmith with an uncompromising approach to hand crafting the best possible gin. We saw Wimbledon doing the same with tennis. With the world’s only grass championship court, the groundskeeping team at Wimbledon works to an uncompromising standard—the grass is maintained at 8mm (roughly the depth of the vermouth in a measure when you’re mixing a martini). They keep a logbook to note any spots that could be improved and bring the book out every year the day after the finals to begin work on the court for next year. Rufus, the Wimbledon hawk, ensures that the lawn stays spotless. Why grass? For the same reason we make gin the way we do—because that is how it was originally done.

So, this partnership of British greats came about through a shared commitment to excellence and tradition. Sipsmith was founded in 2009 and is credited as the pioneer for the gin revival in London. You can see our dedication to an uncompromising pursuit of quality and craftsmanship in our entire range of handcrafted gins. The Championships, Wimbledon, exhibits the same passion and dedication, but to tennis, so this partnership is really the perfect pairing.  When Wimbledon chose us to be the first official gin partner we were thrilled!

Through this partnership and limited-edition release, Sipsmith and Wimbledon bring a taste of their shared commitment to excellence and British tradition to gin and tennis fans alike across the United States.

SZ: We’re huge fans of gin and tennis, especially Roger Federer. In your opinion, why do gin, tennis, and English summers pair so well?

JB: A Brit, Major Winfield, is credited with inventing modern tennis in 1873. At the same time, the gin and tonic first arrived from India to become Britain’s most enduringly popular mixed drink. Essentially, they were born and grew up together. And there are few drinks more refreshing on a summer afternoon in Britain than a properly mixed G&T.

SZ: You guys created a special gin for this year’s championships, Sipsmith Strawberry Smash. What was the inspiration behind the new gin?

JB: Our inspiration for this new gin was simple. There is nothing more iconic to Wimblebon than strawberries and cream – and as the Official Gin Partner of The Championships, Wimbledon, we wanted to incorporate the tournament into our product in a meaningful way. This year in particular, we felt it was quite right to harness the taste of British summertime and use last year’s Championship strawberries to make this year’s champion gin.

SZ: Sipsmith Strawberry Smash uses strawberries harvested from Hugh Lowe Farms in Kent, England. What’s so special about these strawberries and why did you want to use them in a gin?

JB: Sipsmith Strawberry Smash is distilled using real Wimbledon strawberries from the 2020 harvest from Hugh Lowe Farms in Kent, England, the exclusive grower for the Championships. Each strawberry is grown and handpicked to perfection, much like our approach in crafting our gins. In the absence of the tournament last year, these meticulously grown strawberries were instead used to celebrate the partnership between our brand and the iconic tournament, creating a first-of-its-kind gin.

SZ: Can you take us through the process of how you got these strawberries into the London Dry gin?

SZ: What’s your go-to gin cocktail for Wimbledon 2021 and how can we prepare it for ourselves?

JB: My go to cocktail for Wimbledon this year is the Sipsmith Wimbledon Collins, of course! It can be made by combining two parts Sipsmith Strawberry Smash with one part lemon juice, half part simple syrup, soda water and strawberries and a lemon twist for garnish.

SZ: Can you tell us about what a perfect day at Wimbledon would be for you? And what’s the best way to enjoy Wimbledon from the comfort of our own homes?

JB: Great tennis, strawberries and cream and a Wimbledon Collins. The grounds are gorgeous. The food offerings are unsurpassed—especially the picnics, which are perfect for setting up camp on Henman Hill. The museum is also worth a visit. It’s a stunning—and sprawling—facility.

For home: if you’re in the UK, head to www.wimbledon.com and order a Wimbledon picnic delivered to your door, along with a bottle of Strawberry Smash Gin. If you’re elsewhere, have a peek at the offerings, and put together a shopping list to recreate the Wimbledon experience in your own home. Be sure to grab our Wimbledon-inspired cocktail recipes from the Sipsmith website.

SZ: Give us your prediction for this year’s tournament…

JB: If I were a betting man… I’d be broke. But you asked so I will have to go with the #1 seed Novak Djokovic. He looks a sure bet after winning the French Open. However, the Russian entry, Daniil Medvedev, also looks strong at #2. Pushing 40, Roger Federer is determined to nab a 21st slam and best Nadal’s 20. Plus, he has the court experience and the support of the crowds. On the other end of the spectrum the dark horse, Tsitsipas from Greece, took Djokovic to five sets in France before a narrow loss.

In women’s singles, watch Ashleigh Barty from Australia keep her spot as the world number one. Though a lot of eyes are on Iga Swiatek to bring an upset, she doesn’t have a lot of grass court experience. Will it hold her back? Simona Halep, the reigning Wimbledon champ is determined to continue that reign. However, Serena Williams with 23 grand slam wins, brings a lot of grass court experience and phenomenal power to her game. Personally, I’d love to see Katie Swan take it—always root for the Swan.

Back in April, we caught up with Jared to discuss How To Celebrate International Gin & Tonic Day.