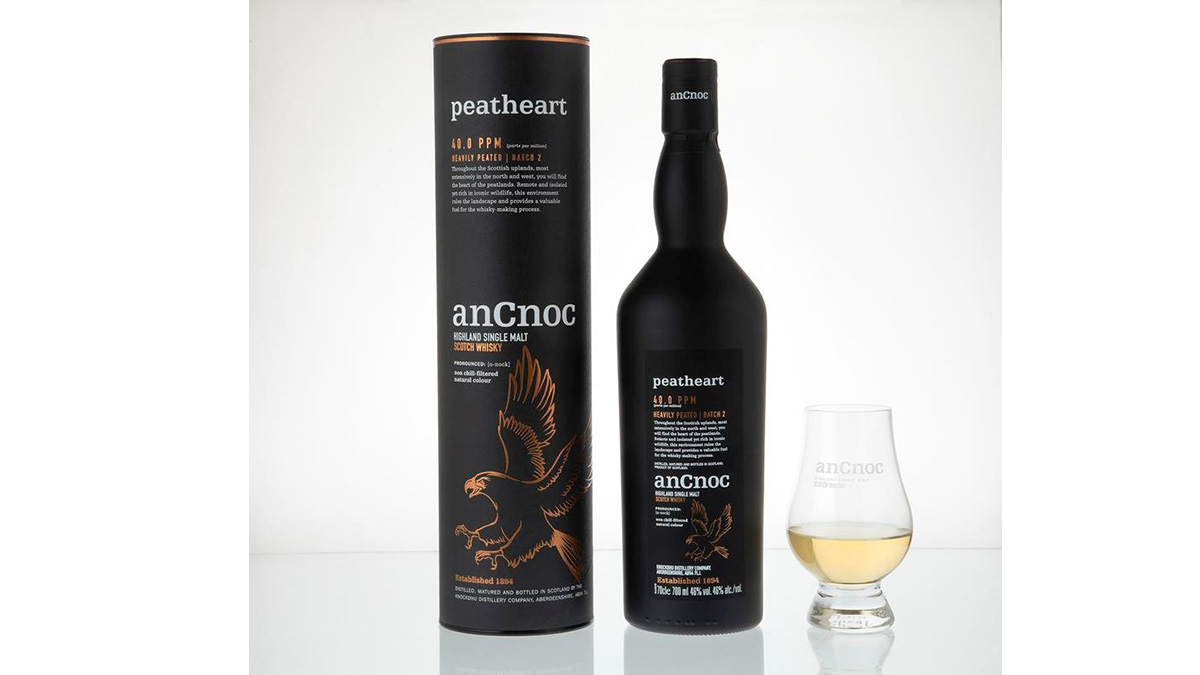 AnCnoc Highland Single Malt Scotch Whisky has released Peatheart Batch 2. The second edition of the Speyside brand’s award-winning permanent peated expression was first released in Sweden and is now available across the globe.

Crafted at Knockdhu Distillery in the small village of Knock, by Huntly in Aberdeenshire, AnCnoc Peatheart Batch 2 uses peated barley in production to add a rich, smoky twist to anCnoc’s classic new make spirit, before maturation in American Oak ex-bourbon barrels. The new offering is presented in an opaque black bottle and tube

“Despite having the same ppm as Batch 1, slight variations in maturation mean that our second Peatheart bottling offers something a little bit different, with a more refined smoky character,” explained Knockdhu Distillery Manager Gordon Bruce. “The combination of fresh, fruity anCnoc notes with these more mellow peat flavours creates a wonderful modern whisky that will be enjoyed by whisky fans across the spectrum. The peaty range now sits alongside our signature anCnoc whiskies to give drinkers two very distinctive sides to our whisky. Whether it’s a dram from our ‘dark’ or ‘light’ side, both represent our commitment to using the best traditional techniques and craftsmanship to make a very modern single malt whisky.”

On the nose, the Whisky features understated peat smoke and barbecue are balanced by ripe pineapples, pears and notes of baked toffee apples, while vanilla and fresh lemon rind lend lightness to the composition. The palate is structured and full, with rich smoke in balance with juicy gummy bears and the light, fizzy sweetness of spun sugar. Undertones of a hay barn and fudge give it a delicious weight. The finish is long and growing, distinctly spicy and sweet with a warming, smoky finale.

AnCnoc Peatheart Batch 1 hit the market back in 2017 and was lauded by critics. In 2019, it picked up a Gold medal at the World Whiskies Awards.

Bottled at 46% ABV, AnCnoc Peatheart Batch 2 (40ppm) is non-chilled filtered and with natural colour. Only 1700 cases of the new batch will be made available across the globe and can be found in independent and specialist retailers and whisky shops for the price of  £52 ($68 USD).