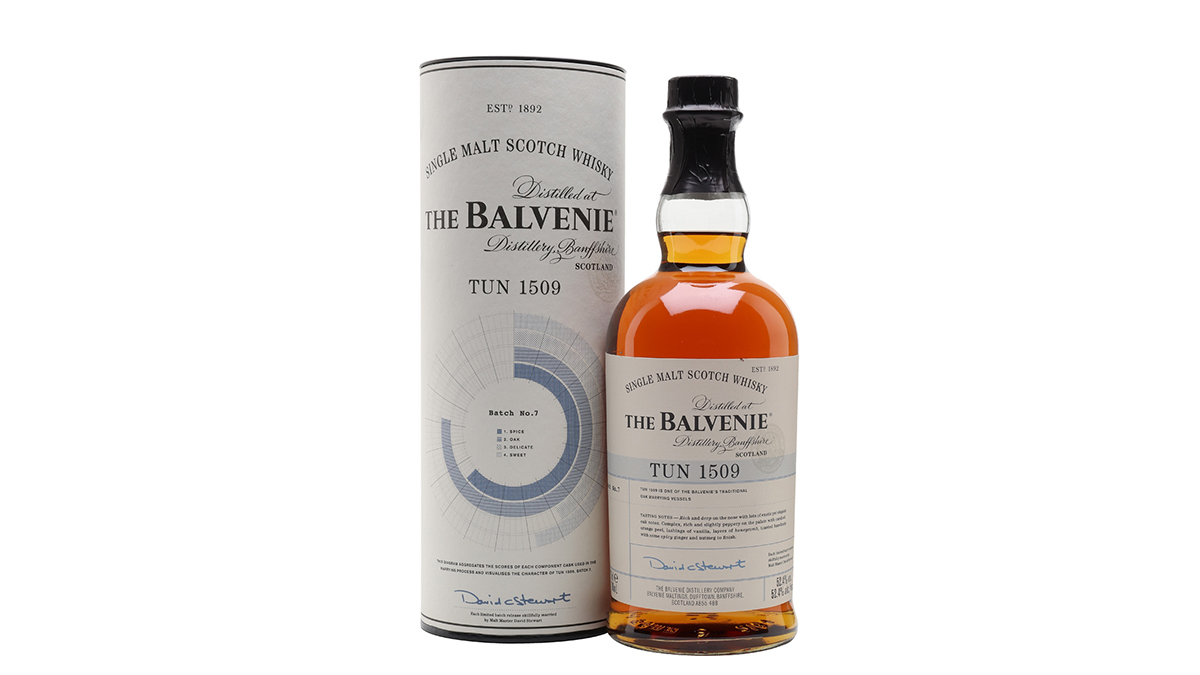 The Balvenie has unveiled Batch 7 of its Tun 1509 series. The annual release comprises liquid from 21 casks that underwent a three-month marrying process.

The Balvenie Tun 1509 series gets its name from the large cask, or tun, in which the Whiskies are married together inside Warehouse 24 of the Speyside distillery.

The seventh release of Balvenie Tun 1509 is a combination of 21 hand-selected casks – four American oak barrels, 10 sherry butts and seven hogsheads – that have spent three in the traditional marrying tun. The marrying process allows the Whisky from each barrel “to mix and create a unique single malt Scotch whisky, which is more than the sum of its constituent parts.”

On the nose, the Whisky is rich and deep with lots of exotic and elegant oak notes, followed by sweeter aromas of dried fruits, raisins and dates, then a spicy outburst of ground ginger and some melted brown sugar. The palate is lush and slightly tangy with candied orange peel, lots of oak vanilla, some golden syrup, layers of honeycomb, toasted hazelnuts with some spicy ginger and nutmeg to finish. The finish is described as Sweet and malty with oak vanilla and spices.

“The Tun 1509 series has been hugely popular with whisky enthusiasts over the years and I’m in no doubt that this expression will receive a similar response,” The Balvenie’s malt master, David Stewart. “Batch 7 showcases this remarkable liquid resulting in a deep and rich Balvenie. It is intensely spicy with sweet aromas of dried fruits, notes of candied orange peel, golden syrup and honeycomb on the palate.”

Every bottle of Tun 1509 Batch 7 comes with a breakdown chart showing details of the whisky, with visual representations of the flavor profile of each of the 21 casks and the overall character of the resulting single malt.

Last month, marked the end of its heralded collection of fifty year old casks with the release of Balvenie Fifty Marriage 0614. Meanwhile, their Balvenie Thirty Single Malt Scotch Whisky was named one of the 10 Best Scotch Whiskies in the World by the 2020 International Wine & Spirits Competition.