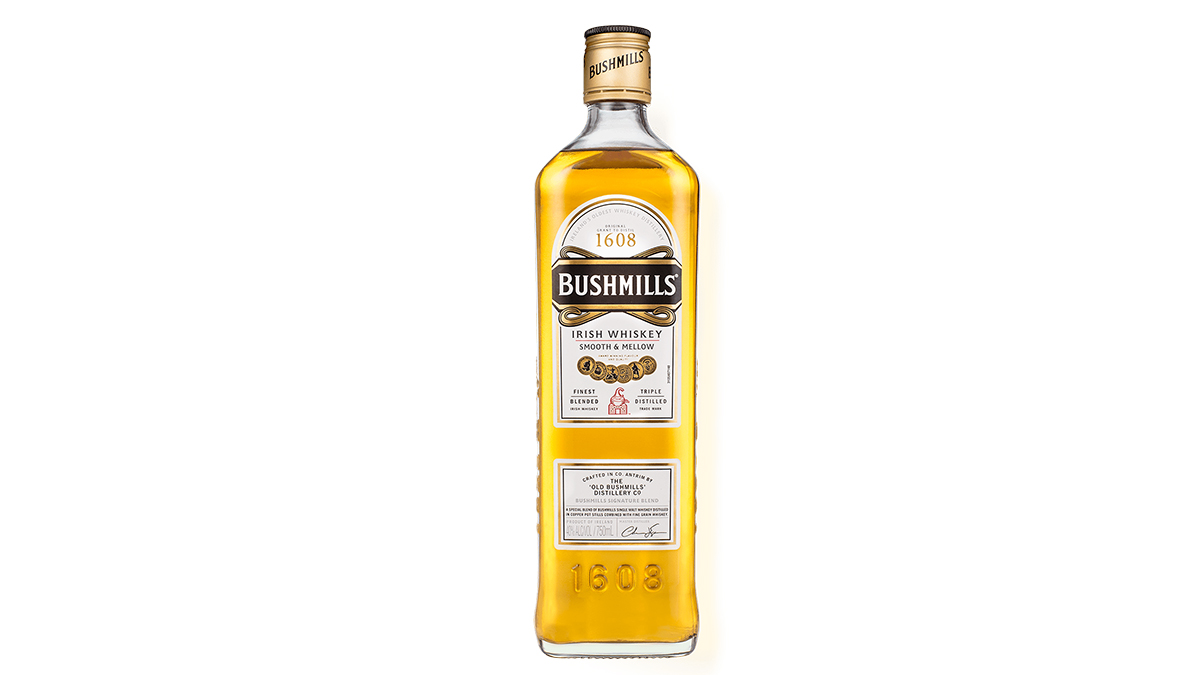 Bushmills Original is a classic Irish Whiskey made from a centuries’ old recipe known for its richness, versatility, and ability to happily warm all palates. The now Jose Cuervo-owned distillery refers to the Original as “The Prizefighter of Irish Whiskey” and the “Original Single Malt”.

A blend of single malt Whiskey and a lighter grain Whiskey triple distilled in copper pot stills, Bushmills Original is aged for five years in ex-Bourbon and ex-Sherry casks. The distillery uses the water from Saint Columb’s Rill, a tributary of the River Bush, in its distillation process.

Enjoy Bushmills Original Whiskey neat, on the rocks, or in an array of delectable cocktails. If you’re looking to mix something up, the distillery recommends a Belfast Derby:

Combine ingredients in a cocktail shaker with ice. Shake for 10 seconds, and strain into a cocktail glass.

Bushmills is located in Northern Ireland in Bushmills, County Antrim along a picturesque, jagged, and windswept coast. It boasts of being the world’s oldest licensed distillery, having procured its license to distill from King James I in 1608. The company built its first distillery in 1784, but hard times forced its closure off and on in the early 1800’s. A fire destroyed the distillery in 1885, but it was quickly rebuilt and continuously operated since 1885. A company steamship, the SS Bushmills, made its first voyage to deliver Bushmills to America in 1890, visiting Philadelphia and New York before traveling on to the Far East. Prohibition interrupted vigorous sales to the American market in 1920, but at the end of Prohibition, Bushmills was ready to resume exporting huge stocks of whiskey.

Ownership of Bushmills changed from Irish Distillers in 1972 to Pernod Ricard in June 1988 and Diageo in June 2005. Diageo traded ownership to Jose Cuervo in November 2014. Sterling banknotes issued by the Bank of Ireland depict the historic Old Bushmills Distillery, one of four distilleries in Ireland.