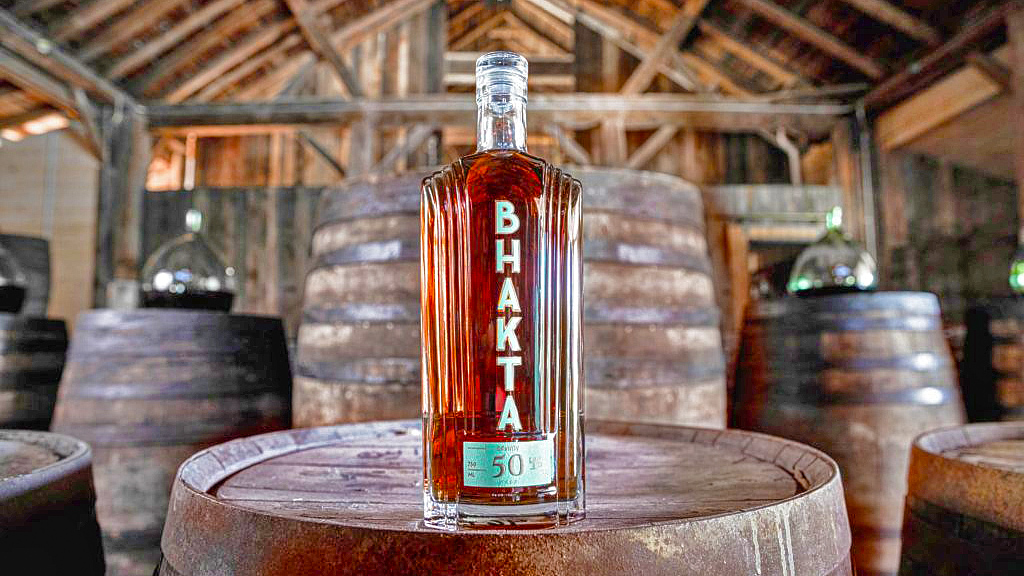 “If I hand you a bundle of fresh grapes and I hand you a handful of ripe grain, which one do you want to eat?… You want to eat the grapes,” explains Raj Peter Bhakta. Combine that with a love for discovery and an appreciation for rarity, and you have the beginnings of Bhakta Brandy, the newest project from the American entrepreneur best known for founding WhistlePig.

Back in 2008 when Raj started WhistlePig, Rye was “your drunk uncle’s drink,” as he puts it. It wasn’t popular and didn’t carry the sometimes triple or quadruple digit price tag often found on high-end Bourbons or Scotch, “but it wasn’t for any good reason, because Rye had more flavor than any other whiskey.” That’s what Raj now sees in Armagnac, which “has more flavors than the other brandies,” and he sees it as “a hidden gem.”

Raj’s journey towards Armagnac started back when he was at WhistlePig with the release of The Boss Hog IV: The Black Prince. That spirit won Best in Show Whiskey at the San Francisco World Spirits Competition 2017. It wasn’t until 2019, however, that he began Bhakta Brandy, which began in a town called Condom, when he and his wife were in France during her fourth pregnancy.

“My wife got tired of me, told me to take a trip,” explains Raj. So he hopped in a “hot rod Cadillac, a CTS-V,” and said to himself, “Okay, well I’ve got a trip, where am I gonna go?” Thinking back to his success with The Black Prince, he set out for Armagnac. “As luck would have it, I ended up in this town called Condom, I couldn’t believe it. Jonathan, who works for me, said, ‘Okay, your destination is Condom, France,’ and I did a, ‘pardon me.’”

From there, Raj began to look around for what he could purchase and there just “happened to be a chateau with the oldest collection of spirits, all in, throughout the world.” It was a collection that spanned generations and Raj just happened upon “the motherload.” “When I looked at it, I was literally flabbergasted,” said Raj. “They had 1868, 1878, there’s nothing like this in the Whiskey world.” And that “really began the creation of Bhakta.”

By his own words, Raj loves value and he loves “giving [his] customers value,” and what he realized in Condom was, “There’s nothing like this… If you want really ancient spirits, which to me stand at the pinnacle of the spirits world, then there’s nothing like Armagnac, and the level of craft that goes into it.”

“This is a place where they can only produce the spirit for like four or five months out of the year, from, I think, the end of December, maybe a little earlier, and into March, and that’s the only time you can make Armagnac, and it has to be from grapes from that region and it is generally still done in wood-burning stills in a field. This is like stuff of lore and imagination that’s real. So coming from a background where we were talking craft in America, this was something altogether out of story books.” And stumbling across it, was simply “good luck.”

Armagnac is a “very interesting micro-climate,” explains Raj. “It’s about 60 miles from the Atlantic and about 60 miles from the Pyrenees, so you have mild winters; temperate, not overly hot summers, so it’s a really fantastic growing climate, which makes it a really lovely place to particularly produce the white grapes that Armagnac can be made from.” Bhakta likes Folle Blanche and Baco.

Raj sees an elegance in Brandy that he doesn’t find in Whisky. “Brandy is a more fruit-based spirit. Grapes, apples, even apricots, peaches, it’s just a more elegant base to start from. I say it intuitively, if I hand you a bundle of fresh grapes and I hand you a handful of ripe grain, which one do you want to eat? You want to eat the grapes, and the grapes are a lot more expensive and difficult to produce. Wine is an elegant, delicate base to start making a spirit from.”

As stated before, for Raj it’s also about value and bringing that to his customers, “Producing brandy costs and producing Armagnac in particular costs about eight times as much as it costs to produce Rye, and  I think it’s an accident of history that Whisky became… Brandy was actually the dominant spirit from the late 1800s to really after Prohibition and it was during basically Prohibition that Whiskey basically took off again because that is what Canada produced and that was our supplier when it was illegal. That’s when Whiskey took over and it stayed.”

Basically, it’s a lot more expensive to make Brandy than Whisky. Armagnac, as it turns out, also happens to be “the spirit that ages best long-term,” says Raj. “It’s because it goes into generally older French oak, and Armagnac, when it’s young it’s an inherently more characterful spirit, which makes it sort of rough when it’s young, but as it ages it smooths out and that becomes character and it holds up well against aging. So you basically have bigger barrels, older barrels, aged in a temperate climate with a spirit that is designed for long-term aging.”

Raj is excited about Armagnac, as he should be, and particularly about his own Brandy. Bhakta carries an age statement of 50 years, but that’s actually just the youngest Brandy that goes into the blend. The oldest is from 1868. “To me it’s almost a mystical experience because you can taste and feel, I can at least, that this… Abraham Lincoln had just died, the Civil War had just ended, Queen Victoria was in the middle of her reign, you can kind of taste the spirits of the spirit. You’re tasting history and you’re tasting wood that goes back to the 1700s, before America even existed, so you’re tasting history.”

With Bhakta, Raj “wanted to bring history alive. So we wanted to create a collection that was over 150 years at its oldest and the youngest was 50 years old.” But simply having some of the oldest Brandy around didn’t mean the product was there yet, and Raj knew there wasn’t something else he wanted from the flavor profile. “There was a eureka moment, traveling around the Armagnac region, when a small producer had a barrel of Bunnahabhain. He put his Armagnac into the Bunnahabhain barrel and I tasted it and I was like, ‘this is it.’”

Raj knew it immediately, “combine the best attributes of Scotch, which is that smoky, briney, peaty flavor with the unique attributes of Brandy, which are its silky sweetness, and you put them both together and I realized, ‘Okay, this is the flavor profile,’ because it creates a bridge for the Whiskey drinker.”

“The whiskey drinker is being bent over the barrel right now, being forced to pay nosebleed prices for a product that’s inherently inferior to Brandy,” saus Raj. “This product is an opportunity to liberate the Whisk(e)y drinker from high prices and thin age statements.”

Armagnac is the next Rye in Raj’s eyes. Think of it how the spicy Whiskey exploded in the wake of the Bourbon boom. Armagnac is this beautiful gem made in the same country as Cognac that somehow got passed over by history.

Raj actually has a pretty good reason for why he believes this happened, “Cognac is right next to Bordeaux. Bordeaux is basically the center of French wine and because it was connected, it was also an area that was controlled by the English and the Dutch. They basically brought the spirit out, they brought Cognac out to the whole world. So Cognac becomes the high end spirit. Then Cognac did a great job developing because they had big brands behind them, they had big companies, gigantic multi-nationals that were exporting the product, whereas Armagnac never had that. It was a small rustic area that was actually pretty inherently agriculturally rich, so they didn’t need it. They had food on the table, so to speak, and roofs over their heads. You know, it’s the center of France’s really great agricultural regions and it was a more remote area.

Take it a step further and you see that “From a craft perspective, there’s nothing that can touch Armagnac. You have hundreds of these craft small producers that are multigenerational. These people have been doing it. They have literally been doing it from generations to generation to generation and they’ve been doing it the same way. Their product is spectacular and designed for long-term aging. And we all know, time is the one thing money can’t buy.

With Bhakta, you’re buying more than just a bottle in Raj’s eyes, it’s an investment. “This is a bottle which we’re pricing at… it started at $200 a bottle, it’s right now at $300 a bottle, it will soon be going up to $500 a bottle, but I want my buyers, I want them to profit,” he explains. And if you look back what Raj did at WhistlePig, you know it’s true. Try and find yourself a bottle of Boss Hog I or Boss Hog II and you’re gonna pay several thousand dollars. “Now and the same thing is going to happen here,” says Raj.

“To me it’s an investment. I invest in Armagnac and I’m giving that investment to customers and you can buy a bottle now that costs two, three, four hundred dollars–three hundred dollars now as I mentioned and moving up–and it’ll probably be a couple thousand dollars a bottle down the road,” he explains. “So I really recommend, it is as true as it may appear self-serving, that you buy two, one to drink and one to keep because it will more than pay for the one you drink, and there aren’t that many spirits that will do that.”