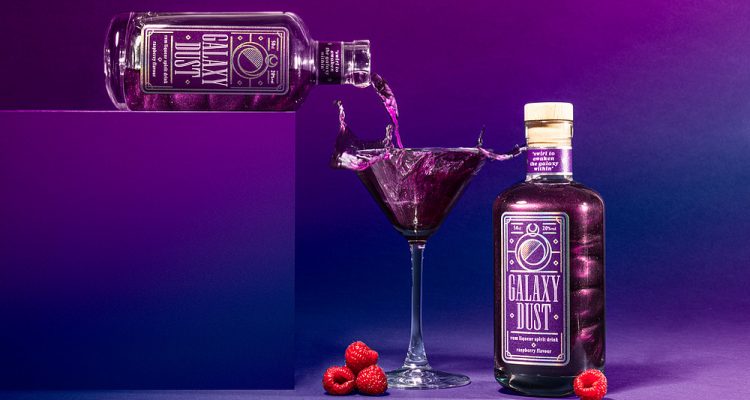 Firebox Launches Galaxy Dust Rum, Promising that it Tastes and Smells of Our Galaxy

Firebox.com, shop for the unusual,  is once again causing a stir across the drinks industry with the launch of it’s latest tipple: Galaxy Dust Rum. The drink is a new shimmering rum-based spirit that looks, tastes and smells just like our galaxy, or so they say.

Simply shake the bottle to awaken the purple, iridescent supernova of shimmering stardust contained within.

Galaxy Dust is a 20% ABV white rum that tastes of sweet, tart raspberries, and shimmers as the liquid swirls around the glass. These elements have been combined to capture the scent, flavour and epic appearance of our galaxy in a bottle. According to scientists, our galaxy smells like white rum and tastes of freshly-picked raspberries. People with bigger brains than ours explain the presence of a chemical known as ethyl formate that is responsible for giving raspberries their unique taste.

With rum dubbed as the ‘drink of lockdown’ by the Wine and Spirit Trade Association, and industry experts predicting it to be the drink of 2021, the team at Firebox wanted to create an exciting version for the drinks cabinet.

Following hot on the heels of the company’s other creative concoctions labelled as its ‘Uncommon Drinks’ range, such as Hybrid Wine-Gin Liqueurs, and Hard Milkshakes, the brand has established itself as the place to go for unique and innovative drinks with a twist.

Speaking about the spacey drink Xavier Unwin, creative director at Firebox.com, said: “While not all of us have the budget to jump on a rocket and explore the galaxy with the likes of Elon Musk, we felt there was no reason that Firebox couldn’t bring the galaxy to you in sensory form, to enjoy on warm summer’s evenings with friends as you stare out into the cosmos.

“The flavour is an ode to this incredible discovery made by astronomers. Naturally, we didn’t just stop at the galaxy themed flavour, but also developed the liquid so that the ethereal swirl of the galaxy could be enjoyed with every pour.”

Galaxy Dust Rum promises to be the perfect drink for those long, summer evenings outdoors, and is suitable to mix into epic cosmic cocktails.