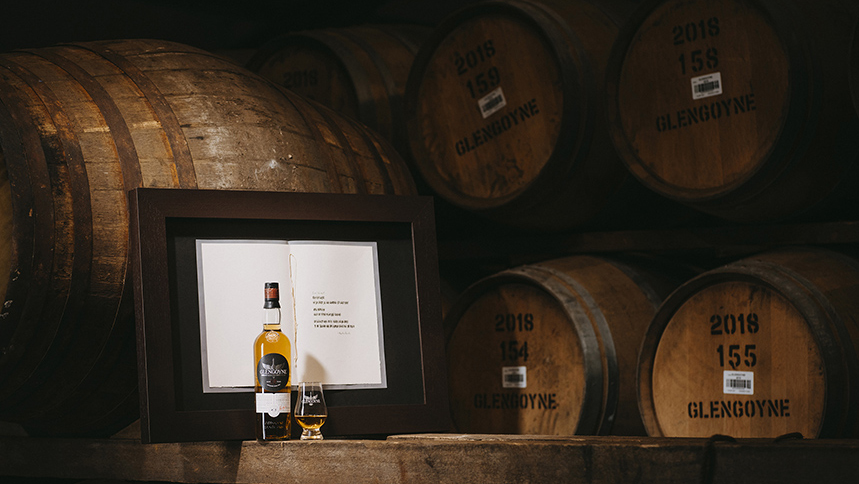 Glengoyne has teamed up with conceptual artist and experimental philosopher Jonathon Keats as part of its launch of a new look and feel across its Whisky range. Taking inspiration from the distillery’s “unhurried and uncompromising” approach to Whisky-making, the one-of-kind literary art project challenges the way consumers themselves engage with time. The overhaul also sees the Highland distillery move to 100% recyclable and locally sourced packaging.

Keats’ Glengoyne art pieces feature poems from some of the most celebrated young poets around the globe, including Cat Hepburn and Jeda Pearl (Scotland), Courtney Peppernell (Australia), Alison Malee (America) and Martin Reints (Holland). The poems, however, will not appear instantly, instead they will slowly appear over the next two to 50 years.

Each piece has been created using a printing technique that makes words appear gradually over time, based on exposure to ultraviolet light. The project, inspired by Glengoyne’s “unhurried approach to whisky-making,” challenges Whisky fans’ relationships with time and appreciation of craft.

Each of the poems will hang in the Glengoyne distillery for consumers to visit, with a first layer of ink slowly fading away, in time, to reveal the poems underneath. A version of each poem will also be exhibited in the home countries of the poets from October, including at renowned Whisky bars, The Brandy Library (New York), The Ubiquitous Chip (Glasgow) and J.D. Williams (Amsterdam).

“As everything becomes instantaneous, delivered next day, our appreciation of craft and time is diminishing,” explains Katy Muggeridge, senior brand manager for Glengoyne. “Glengoyne distillery has always valued the role time can play and its importance to our whisky making.

“That’s why for this special rebrand, we wanted to bring this idea of unhurried into a different world. These special pieces of literary art will appear when they are ready, likely anytime over the next two to fifty years depending on their exposure to UV light, encouraging a different interaction with the work and a greater appreciation of its craft.”

Meanwhile, Glengoyne’s new identity features an updated illustration of its namesake goose. It will roll out this month across the Collection, along with a variety of special releases, including Legacy Series: Chapter Two and Cask Strength Batch No. 008, which both launch globally this month. Older expressions will be unveiled later this year.

The Glengoyne Collection also becomes fully recyclable, free of plastic and magnets, and locally sourced, with nearly all of the material originating from Scotland.

“Glengoyne has always chosen to take its time to do things the right way – for every minute other whiskies spend in their stills, ours spends three, all in the name of outstanding fruity flavour. This is the Glengoyne way and it’s why the same appreciation of time has gone into this rebrand,” says Muggeridge.

“As one of Scotland’s greenest distilleries, it was extremely important to us that our commitment to sustainability was reflected in the new packaging, as well as giving us a platform to better connect our customers to the unique processes and people behind our award-winning whisky.”