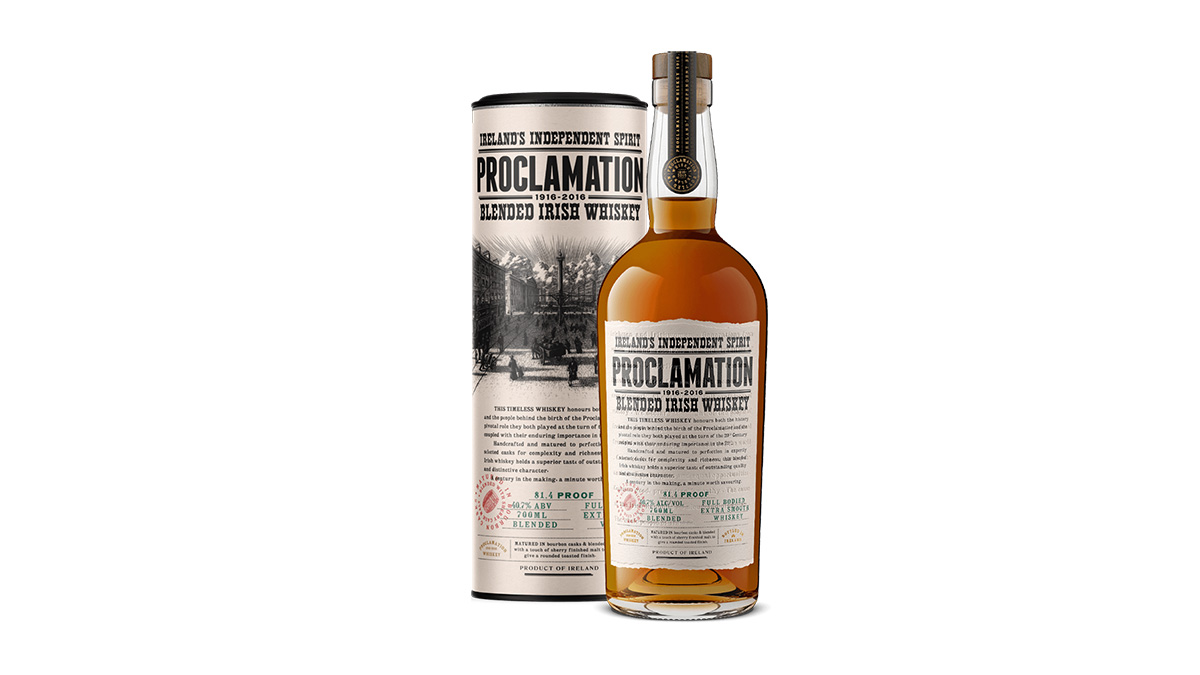 Proclamation Blended Irish Whiskey is coming to the United States. The County Mayo-based brand is owned by Inis Tine Uisce Teoranta and makes its spirit from a blend of Irish grain and malt Whiskeys.

Triple distilled and matured in Bourbon casks, Proclamation Irish Whiskey includes a touch of sherry-finished malt, which adds a touch of complexity along with notes of fruit and cream. Master Blender Paul Caris, who is also responsible for Grace O´Malley whiskey, hand selects casks with distinctive character and complexity to age the Whiskey.

“We are very proud to bring Proclamation to the U.S. market,” said Stephen Cope, Managing Director of ITUT. “It serves to honor and celebrate the shared history between Ireland and America, a pivotal relationship that helped create the independent Ireland we know and love today. From its concept, historical reference, through to the labelling, blending and creation of the finished liquid, this whiskey has been expertly crafted through collaboration.”

The idea for Proclamation Blended Irish Whiskey was originally conceived to honor the history of the people behind the birth of the 1916 Proclamation. Historian, author, and publisher Mícheál Ó Doibhilín explains, “We wanted to celebrate Ireland’s independent spirit through a quality Irish whiskey, one that also tells the story of some of the unsung heroes of this time. Proclamation Blended Irish Whiskey pays tribute to the three printers of the Proclamation, William O’Brien, Michael Molloy and Christopher Joseph Brady and acknowledges the important role they played during a hugely significant time in Irish history.”

The Proclamation boasts a design that reflects the physical attributes of the original document. The printers had insufficient type to print it all at once, and, therefore, had to print it in two parts. The label includes blind embossing, while fonts were specially redrawn to emulate those of the Proclamation, such as the spurious ‘e’ that features in the original document.

On the nose, the Whiskey features aromas of ripe pear, followed by an abundance of apricot and crème brulée notes, which slowly develop through to rich custard, freshly brewed cappuccino, and end with woody notes. The palate is front loaded notes of toasted brioche, freshly baked pastry and overtones of macerated yellow fruits, while fusions of tannins on the mid-palate are followed by a robust yet rounded finish. The finish is creamy and mellow with hints of toasted cereal.

Proclamation Blended Irish Whiskey is currently on sale for $29.99 and can be found in specialty stores throughout the United States and Europe.