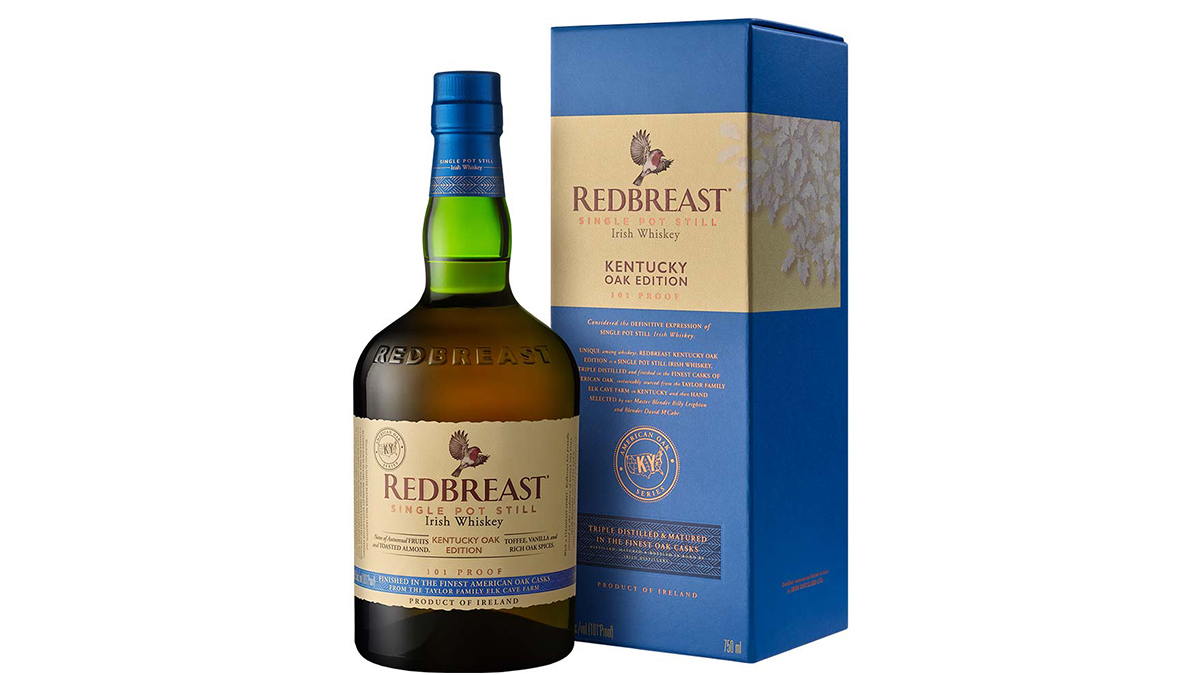 Redbreast has unveiled Kentucky Oak as the first release in its new American Oak series. The new collection of Irish whiskeys from the Irish Distillers-owned brand will be exclusive to the United States and celebrates the role of wood in the production of Redbreast whiskey.

“Redbreast is renowned for its heavy Sherry influence,” explained master blender Billy Leighton. “This can often mean that its ex-Bourbon counterpart is overlooked, even though Kentucky white oak barrels, which have previously held Bourbon, are central to the Redbreast DNA.

“This series explores the role American white oak plays in the composition of Redbreast, and takes it one step further, with a final flourish in virgin casks to enable the wood contribution to truly take centre stage.”

Redbreast Kentucky Oak is made from malted and unmalted barley, triple distilled in copper pot stills, and matured in American oak bourbon barrels and Spanish oloroso Sherry butts. The whiskey is then finished for a minimum of four months in naturally air-dried American white oak barrels sourced from the Taylor family’s Elk Cave Farm in Kentucky.

The oak, certified by the Programme for the Endorsement of Forest Certification (PEFC), was worked into 63 casks and shipped to Midleton Distillery. These casks were chosen for their high-quality white oak.

The nose opens with notes of freshly cut cedarwood, almond, and vanilla, which are complemented by sweet fruit and warming charred wood influences. The palate finds cinnamon, nutmeg, and clove working in tandem with the oak’s rich tannins. Autumnal fruit notes delicately linger with sweet and decadent flavors of brown sugar toffee and vanilla. On the finish, fruits are the first to slowly fade, leaving the pot still spices to linger in harmony with the sweet and intricate American oak.

“Crafting this whiskey has been a journey of discovery,” added Leighton. From learning about the trailblazing work of the Taylor family improving the sustainability of America’s oak forests, to exploring the region’s influence upon our whiskey, all of which has shaped this deliciously complex whiskey. The Kentucky Oak series demonstrates Redbreast’s continued evolution, setting the bar for subsequent expressions in the series.”

Redbreast Kentucky Oak is exclusively available in the US for the price of $95.99 per bottle. For more information, head over to the brand’s official website.

Last month, Redbreast unveiled the fifth bottling in its Dream Cask series – a 30-year-old single pot still whiskey known as the Double Edition. In September, the brand launched its Iberian Series with the release of Pedro Ximénez Edition whiskey.