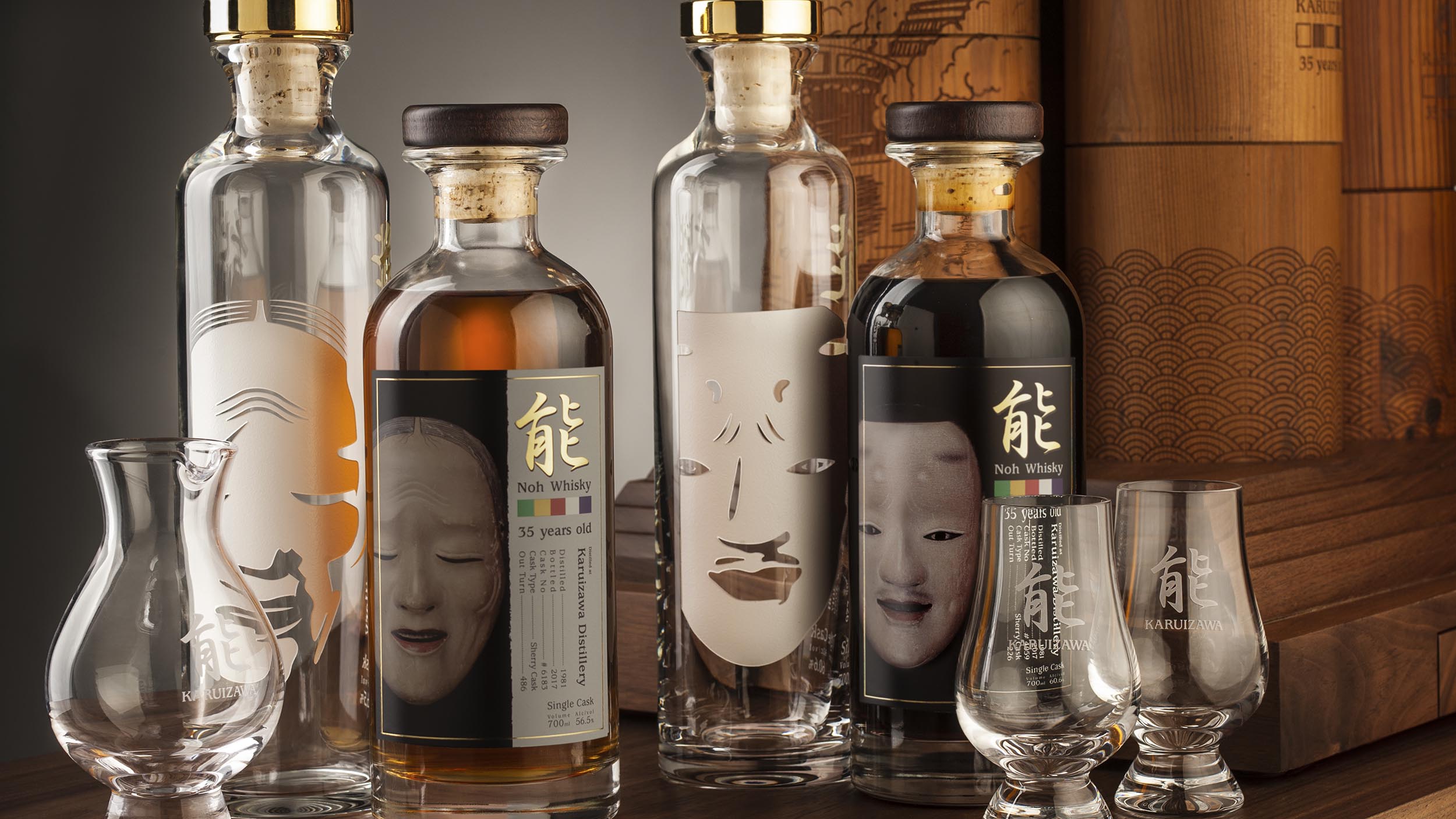 Karuizawa is renowned as one of the legendary whisky distilleries of Japan, having created some of the most coveted and collectable whiskies in the world. Now the Japanese whisky distillery’s incredibly rare 1981 vintage single cask malt whiskies are being released in exclusive sets, encased in stunning, bespoke Glencairn Crystal glassware and lunawood casing.

Each set includes two bottles of the precious Japanese single malt whisky, one from each of two remaining casks (no. 4059 and 6183). Only 30 sets of ‘The Legend of Asama’ are available and will be released over a three-year period.

Aged for 20 years at the Karuizawa Distillery, these casks were transferred to Chichibu Distillery, Saitama Prefecture, where their custodian was Ichibori-san, the legendary former distiller at Karuizawa.

In recent years, Karuizawa whisky has become celebrated within the whisky world and highly sought-after amongst whisky collectors. The Karuizawa Distillery was based at the foot of Mount Asama, one of Japan’s most active volcanoes, in Central Honshu. The site was perfect for whisky making – there was no shortage of snow melt from Mount Asama and it was volcanic-rock-filtered and mineral rich. This aided fermentation and contributed to the clean, crisp flavor of the whisky. Temperate summer temperatures and cool winters were ideal for maturing the spirit.

Only a tiny quantity of Karuizawa was released as a single malt during the distillery’s lifetime and almost all of it was released exclusively in Japan. When the Japanese economy collapsed during the 1990s, Japanese whisky distilleries began to close, Karuizawa Distillery included, sadly closing its doors in 2001: it was later demolished in 2016.

After several years of negotiation, in 2011 the remaining stock of 364 casks were sold and since have gradually been bottled and sold – many achieving phenomenal prices at auctions: until now only two casks were remaining. Renowned whisky collector and connoisseur Mahesh Patel, Founder of Universal Whisky Experience, chose casks 4059 and 6183 in 2011 and kept them at Chichibu Distillery to continue their maturation until 2017 when some of the whisky was bottled and sold in tiny batches. The last remaining bottles from each cask have been held back until now, for this exclusive ‘Legend of Asama’ release.

“I am extremely excited to finally be releasing this very special whisky to the world,” said Patel. “I wanted to ensure that when these exceptional whiskies were released, they were presented in a beautiful way that could tell the story of their turbulent past and be celebrated by the person lucky enough to purchase them. This vision, along with Glencairn Crystal’s creativity and innovation has brought a part of this spectacular distillery back to life.”

The bottles in which the Karuizawa malt is presented are decorated with Noh masks – the Noh is Sino Japanese for skill, craft or talent which well describes the care with which the whisky has been made. Noh theatre is a unique form of dance-drama performed in Japan since the 14th century integrating masks, elaborate costumes, props and music with chanted drama and dance based on old traditional tales.

The packaging and presentation of the sets has been produced by the iconic Glencairn Crystal Studio in East Kilbride, Scotland – the creators of the world’s most famous whisky glass, the Glencairn Glass.

The tubes are hand crafted from lunawood in two sections which fasten together with a screw-thread hand cut into the wood and are works of art in their own right. The design pays tribute to Mount Asama, alongside the Olympic Games taking place in Japan this month.

“The inspiration for the packaging can be summed up as ‘Japanese simplicity’, understated, clean, and made only from natural materials,” explained Scott Davidson, New Product Development Director at Glencairn Crystal. “The whole display stands on an elevated plinth, arranged in a manner which reflects the noble elevations of Mount Asama. It has been an absolute honour for our talented team of craftspeople to be involved in this remarkable project.”

Each set is also accompanied by a signed and numbered hardback book written by whisky writer Charles MacLean MBE featuring the story behind ‘The Legend of Asama’ collection and tasting notes.

For more details about ‘The Legend of Asama’ Karuizawa 1981 collection, head over to the official website.