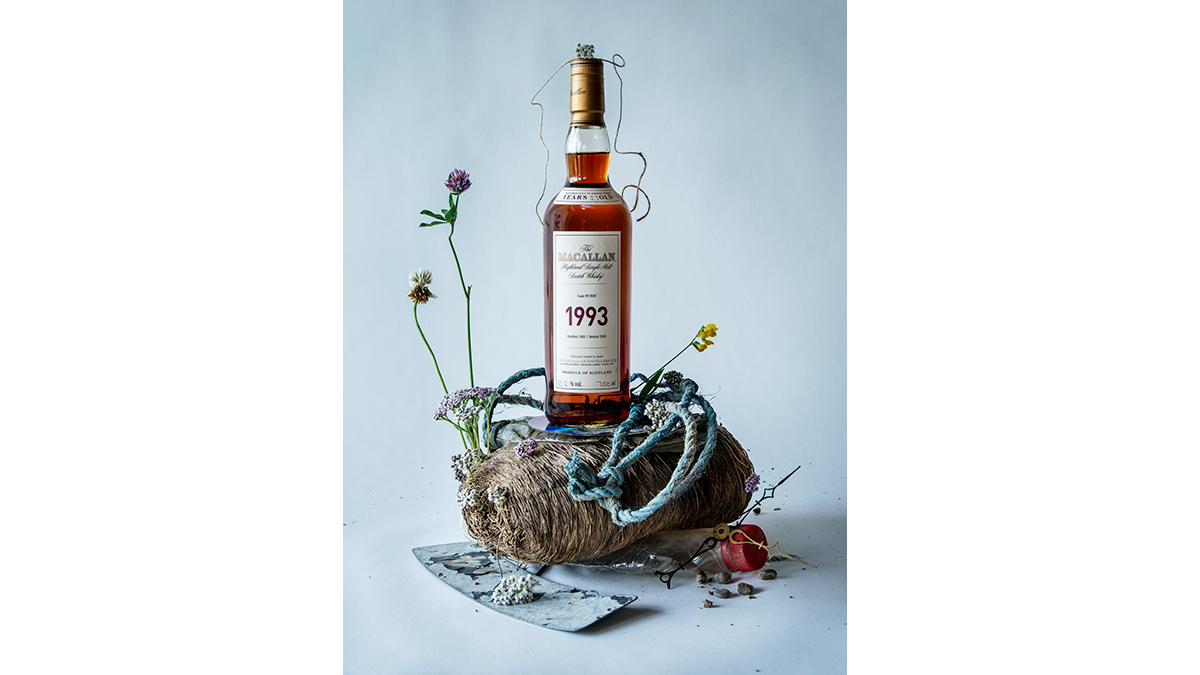 The Macallan has unveiled the newest addition to its iconic Fine & Rare Collection, The 1993 Edition. The new expression from the Speyside Distillery joins a collection that started 20 years ago and features Whiskies from eight decades, 1926 to 1993.

To capture the essence of the Fine & Rare Collection, The Macallan worked with photographer Tim Walker, who journeyed to The Macallan Estate to capture the Whiskies and the history of each decade from which they derive.

For the 1993 Edition, Walker posed the bottle with a bird’s nest, weathered twine, the handpiece of a clock, and flowers, among other details, against a backdrop of shadowed sky blue. The portrait is a love letter to the 1990s, which witnessed the coming of the Internet and the advent of the environmental movement, as well as to Speyside and the Highlands, and hints at the passage of time. Each vintage and according decade is uniquely represented through Walker’s artistic lens.

“With fifty-seven vintages released over eight decades, the iconic Fine & Rare Collection is a culmination of the work by many men and women dating back to the early Twentieth Century“ said David Cox, Former Director, The Macallan Fine & Rare. “We felt now was the time to look back to the introduction of this collection of old and rare whiskies, the likes of which had never been seen before, and to remind ourselves of what this historic collection represents, both now and for the future.”

As architect and the Former Director of The Macallan Fine & Rare, David Cox provides a poetic look into the history and heritage of this unprecedented range of single malts via a film, which can be seen below. Shot at The Macallan Estate, the film journeys through time, to the soul of The Macallan, encompassing the spirit of the Fine & Rare Collection.

Matured in a single Sherry seasoned American oak hogshead cask for 27 years, the warm mahogany-colored Macallan 1993 Edition presents a nose where aromas of vanilla fudge and citrus merge with bright fruits of red cherry, plum and peach. There is a rich fig and spiced combination of cinnamon and ginger, along with hints of salted popcorn combined with peach, figs, cherries, rich antique oak leather, and cigar box. The palate offers Sweet oak, combined with rich dark chocolate. Caramelized grapefruit blends into vanilla, then moves into wood spices of ginger, hints of citrus and a light liquorice, antique oak, mint, forest fruits and dark chocolate. The finish is described as long with a rich ginger and chocolatey intensity.

Those interested in purchasing the Whisky should email: [email protected]

It has been a busy fall for The Macallan. Just last week, the distillery unveiled The Red Collection, featuring its oldest ever Scotch Whisky, The Macallan 78 Year Old.

And just a couple weeks before that, The Macallan unveiled Edition No.6. The limited edition single malt Scotch honors the water that gives life to the distillery and surrounding land, as well as marks the end of a chapter, as it will be the final addition to the Speyside distillery’s celebrated Edition Series.