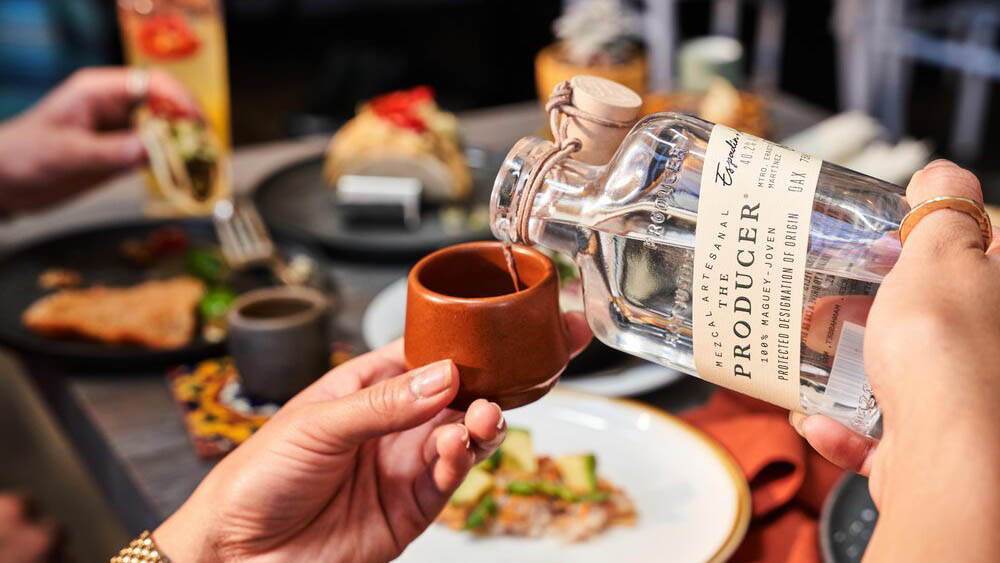 The Producer Mezcal has launched in the US with two expressions, Ensamble and Tepeztate. Hailing from Oaxaca, Mexico, the brand looks to present a mezcal that “speaks to patience, passion, and an appreciation for refinement,” according to a press release.

In conjunction with the launch, the brand has unveiled its Producer Series in partnership with Swizz Beatz. The new annual series highlights partnerships with influential artists committed to the same excellence as the mezcal.

“The project started as a bridge of connections between U.S. and Mexican cultures, with the goal to open the door for those curious about mezcal, wanting to learn about the individual agaves, palenques (distilleries), producers and role mezcal plays within the culture of Oaxaca,” says Carlos Sada, Head of Operations for The Producer. “The Producer is dedicated to philanthropic ventures and community growth programs, by providing educational resources and various mentorship opportunities to their community of producers and their families in Oaxaca.”

Each expression of The Producer tells the story of the maestros who carefully craft each mezcal: Erasto Martinez Hernandez, a third generation Mezcalero who spent his early years learning from his father on how to work the agave fields and the stills; Celestino Sernas Lopez, also a third generation mezcalero, and Juan Pacheco Santos from La Noria, Ejutla. Each expression tells its own unique story of its time spent maturing in the earth through its unique flavors.

Bottled at 40.2% ABV, Ensamble is a blend of Espadin and Cuishe. The Palenque origin for Producer Mezcal Ensamble originates from Tlacolula de Matamoros in Oaxaca, with the agave originating from Tlacolula de Matamoros and Soledad Salinas in Oaxaca. Maestro Erasto Martinez produces the Ensamble in copper pot stills with an eight to eleven day open air fermentation to allow for natural airborne yeast to ferment the mash. The Espadin (Angustifolia Haw) are harvested at seven years while the Cuishe (Karwinskii) are harvested around an average of nine years. Abiding by artisanal methods, the cooked agave hearts are crushed using a stone tahona wheel. Approximately 2,000 bottles are produced per batch and the mezcal is priced at $46.99.

Bottled at 40.2% ABV, The Palenque origin for Producer Mezcal Tepeztate is Santiago Matatlan, Oaxaca, with the agave origin from the Sierra Sur, Oaxaca. The coastal region of the Sierra Sur imparts a subtle salinity and dryness to the distillate and is a true expression of terroir. Maestro Celestino Sernas produces the Tepeztate in copper pot stills with a 13-day open air fermentation. The wild Tepeztate are harvested around an average of 16 years but can take up to 25 years to hit peak maturity. Just 666 bottles are produced per batch and are priced at $97.99.

The Producer Mezcal imports water from an area in Oaxaca called San Baltazar Guelavila, which is known for its mineral driven, soft water. This water is used to dilute the blend of Espadin (Angustifolia) and Cuishe (Karwinskii) adding to the distillates earthen minerality. Once harvested, the Cuishe and Espadin “piñas” (agave hearts) are cooked together in an earthen oven for over 72 hours. By cooking the “piñas” together it allows for the same smoke to circulate, uniform temperature for caramelization, and wood/rock to emphasize the terroir.

The Producer Ensamble and Tepeztate are now available at retailers in California, New York, Nevada, and Texas, and the team plans to add more wild agave selections like an Arroqueño in 2022.