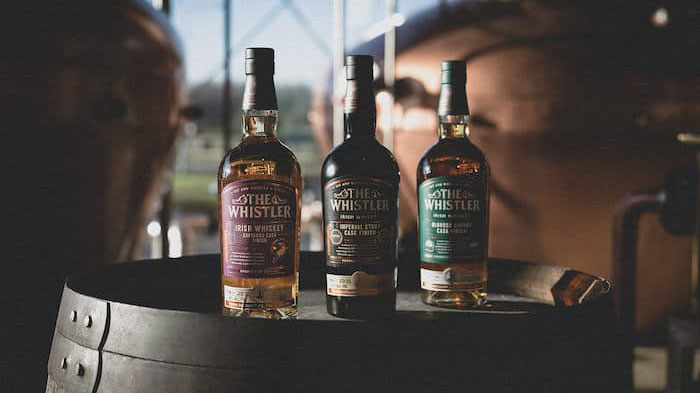 The Whistler Oloroso Sherry Cask Finish is triple distiller and features the distillery’s signature blend of 35 percent single malt Whiskeys and 65 percent grain whiskeys, which are independently matured in ex-Bourbon barrels for at least four years before being married together and finished in Bodega Sherry Oloroso Casks for at least 12 months.

According to the distillery, the Sherry Cask Finish’s nose features aromas of dry sherbet lemon, white grape, walnut, nougat with creamy raspberry and a hint of tropical fruits. The palate has notes of bergamot orange, mouth coating nougat, a slight minerality, tied together with a hint of coconut, banana and a brief pear note. The finish is sweet, lingering finish with a dry wood prickle.

The Whistler Calvados Cask Finish is a collaboration between Boann Distillery and famed Calvados producers Château du Breuil, in Normandy, France. The expression features the same base high malt content signature blend used in the Oloroso Sherry Cask Finish. The Whiskey blend is then married together and filled into Chateau du Breuil’s finest 10-year-old French Oak Calvados casks and left to finish for a period of at least 15 months. This whiskey was awarded a Gold medal at the 2020 World Whiskies Awards.

The Calvados Cask Finish features apple drops, fresh citrus zest, creamy and luscious toffee undertones with banana, apricot, melon and creamy red raspberries on the nose. On the palate, sweet peach presents on the fore with pear and a bright fresh citrus zest, while malt undertone with creamy vanilla can be found underneath. The finish is long and creamy with hints of pear and citrus zest remaining.

The Whistler Imperial Stout Cask Finish is a collaboration between Boann Distillery and its sister brewery, Boyne Brewhouse. This expression begins its life, when ex-sherry barrels, containing The Whistler 7-Year-Old Blue Note, are emptied by the distillery and sent to the brewery for its 10.8 percent Imperial Stout beer, which is left to mature in the casks for a minimum of six months. Once the beer is fully matured, the casks are emptied of beer, and, on the same day, filled with a bespoke whiskey blend of 50 percent wheat Whiskey, 35 percent malt Whiskey, and 15 percent grain Whiskey, all individually matured in ex-bourbon barrels before being married together and finished in the Imperial Stout beer Casks for a further six months.

On the nose, the Imperial Stout Cask Finish features dark berries mixed with a hint of bitter coffee and creamy cocoa. On the palate, the creaminess from the cocoa follows through, pairing beautifully with the subtle coffee tones. This is rounded out by hints of caramel. The finish is long, lingering with a creamy mouthfeel.

The Whistler Irish Whiskey Cask Finish Series is exclusively available in the U.S. with Boann Distillery’s long-term industry partner Prestige Beverage Group. All three Whiskies will be available in 750ml bottles with an SRP of $34.99 for the Oloroso Sherry Cask Finish and $39.99 for the Calvados and Imperial Stout Cask Finishes. The Calvados and Imperial Stout Cask Finishes are now available in Arizona, California, Nevada, Washington, Wisconsin, Connecticut, Massachusetts, New Jersey, New York, and Texas. They can be purchased via Drizly.