Two Stacks Irish Whiskey Unveils Dram In A Can 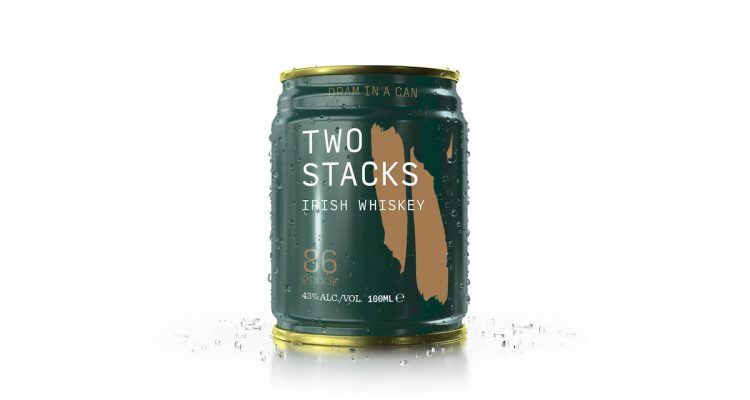 Two Stacks Irish Whiskey has unveiled Dram in a Can. The new offering is “the world’s first 43% whiskey in a can,” says the Co Down-based brand.

Arriving in 100ml cans, Two Stacks Dram in a Can is a blend of light and dark grain, pot still Whiskey and peated malt. Aged in ex-Bourbon, Oloroso Sherry, and virgin oak casks, the release is one of only a small number of Irish Whiskeys made using peated malt in its blend. The Whiskey is non-chill filtered and has no added coloring.

“We spent a lot of this year in lockdown developing Dram in a Can,” said Shane McCarthy, one of the founders of Two Stacks. “We want to offer access to premium Irish whiskey in smaller quantities – allowing more experimentation and sharing among friends whenever and wherever. A four-pack of Dram in a Can is meant to be enjoyed at a dinner party, on a camping trip, after a hike, or skiing. Some may even be trying Irish whiskey for the first time.”

The Whiskey appearing in the cans will also be available as a 750ml bottle, called Two Stacks Blended Whiskey.

“Two Stacks Irish Whiskey has ambitions to become a globally recognized independent bonder, blender and bottler of the most innovative whiskey creations, both in terms of liquid and packaging,” added co-founder Liam Brogan. “Our initial launch showcases Ireland’s first 5-part blended whiskey, and the Dram in a Can is a new global first for packaging straight whiskey in a can.”

The U.S. launch will be marked by a virtual St. Patrick’s Day celebration on March 19 in collaboration with Stories and Sips‘ Facebook and YouTube live channels. The online “Lock-In” will bring in local Irish musicians and bartenders showcasing cocktails and suggested serves. Dram in a Can will be available across the United States for $18.99 per four-pack.