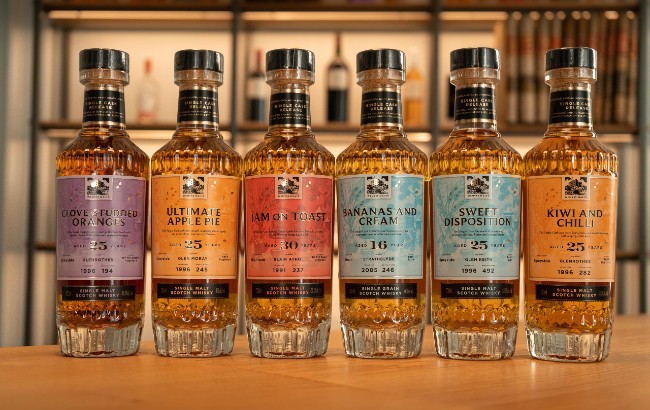 Wemyss Malts has unveiled six single cask Scotch whiskies, including a 30-year-old bottling from Highland distillery Blair Athol. Each expression has been named according to its flavor profile, spanning sweet, spicy, smoky, rich, light, and oily.

The oldest whisky in the new collection is the 30-year-old Blair Athol, which will be available exclusively to Wemyss Malts’ Cask Club members for £300 ($400 USD) per 700ml bottle. It was matured in a first-fill Sherry hogshead.

Jam on Toast, a ‘spicy and jammy’ single malt, was distilled in 1991 and bottled this year at its cask strength of 50.6% ABV. Only 226 bottles have been created.

“We have selected one very special bottling; a 30-year-old Blair Athol named ‘Jam on Toast’ to be an exclusive release to our Wemyss Malts Cask Club members,” said Kirsty Mackinnon, brand manager, Wemyss Malts. “Anyone interested may join the Cask Club free via our website. Whether you are a newcomer to whisky or an experienced imbiber, the Wemyss Malts Cask Club also aims to delight and enlighten with regular features and competitions.”

Kiwi and Chilli (55.2% ABV) was also sourced from Glenrothes. Only 282 bottles are available, priced at £225 ($229 USD) each. The 25-year-old whisky was distilled in 1996 and is said to have honey-rich sweetness, exotic fruit and spice on the palate.

“Winter is all about treasuring time with loved ones over the festive period, with this in mind our latest selection of single casks convey an assortment of fortifying and warming flavours,” said William Wemyss, founder and managing director at Wemyss Malts. “With this assortment of single casks from the spritely and sweet Ultimate Apple Pie, to the incredibly decadent Glenrothes aptly named Clove Studded Oranges and the show stopping 30-year-old Blair Athol named Jam on Toast, we truly have something to please all whisky fans.”

Four of the six whiskies will be available from select retailers in the UK, EU, and key Asian markets.