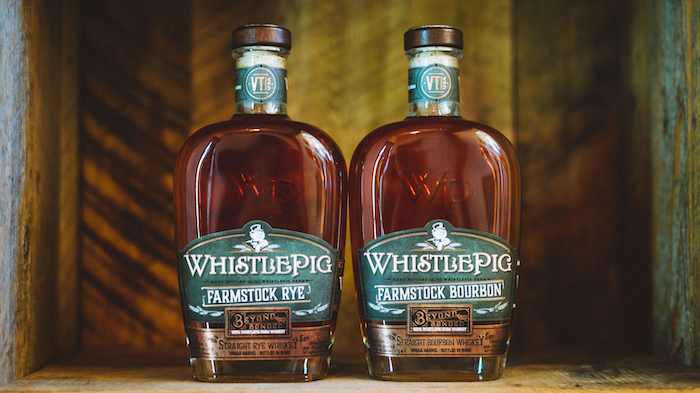 The bourbon is made from 51% Dent Corn and 49% Remington and Rifle Rye. Each single barrel is aged at least 4 years, 4 months and 14 days in Vermont Estate Oak barrels. It is bottled by hand in May 2021 at 100.1 proof

“FarmStock Beyond Bonded Bourbon is a Straight Bourbon Whiskey made with a high rye mash bill clocking in at 51% Dent Corn and 49% Remington and Rifle Rye varietals harvested from ‘North Orwell 1’ and ‘North Orwell 2’ fields. Both whiskeys were distilled on WhistlePig’s original hybrid still, ‘Mortimer’, proofed with water from WhistlePig’s Farm well, and aged for upwards of four years in Vermont Estate Oak barrels which were produced from local Vermont oak. The oldest barrel in the release was aged for four years, 8 months and 14 days.”

“Beyond Bonded has been our most ambitious experiment to date. Whiskey making is a labor of love, with challenges at every step of the process,” said WhistlePig Distiller Emily Harrison. “In Vermont, the short growing season and extreme temperatures make for much tougher farming than in the south. After harvest, Rye is a notoriously difficult grain to distill, but we’ve always believed that the benefits of its complexity are well worth the effort. FarmStock Beyond Bonded shows its incredible potential once again, in both Rye and Bourbon. Seeing it leave the Farm is a dream come true.”

Earlier this month, to debut the Beyond Bonded collection, the first ever barrel of Beyond Bonded FarmStock Rye, Barrel No. 0001, was auctioned off at Dana Mecum’s 34th Original Spring Classic in Indianapolis. After whiskey fans across the country bid on Barrel No. 0001, the winning bid resulted in a total contribution of $100,100.00 to Farm Aid.

Hitting shelves across the United States this month, with no barrel or bottle being exactly alike, both WhistlePig Beyond Bonded Rye and Bourbon will be offered with an SRP of $99.99 per 750ml bottle. The next limited release of Beyond Bonded is expected in Spring 2022.

In February, WhistlePig unveiled a new one off cask finished rye whiskey series dubbed Sasquatch Selects. As part of the launch, the Vermont-based brand has revealed the collection’s first two releases, the core 12 year old WhistlePig finished in a Peruvian Rum Cask (Volume 1) and a Chablis Barrel (Volume 2).