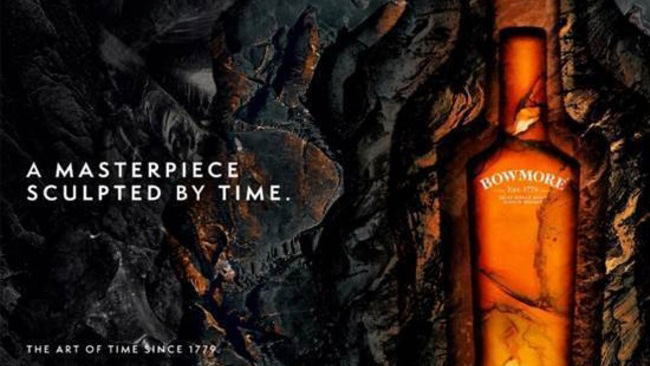 Bowmore has unveiled “The Art of Time,” a new global campaign celebrating the Islay Scotch Whisky brand’s more than 240 years of history. Launching in October, The Art of Time will cover traditional media, social media, and digital commerce platforms as well as retail displays and window displays.

“The Art of Time” will give viewers an in-depth look at the history of Bowmore, which began back in 1779. It tells the story of how the brand’s Whiskies benefit from the power of time, becoming even more beautiful and precious over the years.

As the oldest licensed distillery on Islay, Bowmore has been refining its craft for over 240 years, and still handcrafts its malts today. It’s that hands on, attention to detail, and care that  creates the balance of mild smokiness, maritime minerality, and fresh stone fruit notes that is so characteristic of the house’s style.

Bowmore created “The Art of Time” campaign to provide a single identity across its core and prestige range, and features a striking new color palette and visual feel, inspired by the Islay coastal landscape coming together with the Whisky itself.

For the campaign’s new visuals, Bowmore drew inspiration from its surroundings, specifically Islay’s black stone formations that also surround the distillery. These formations have a strong connection to Bowmore’s own story, and Islay is home to some of the oldest strata in the world.

Céline Daniel, Global Marketing Manager at Bowmore, comments, “We are delighted to unveil our new ‘The Art of Time’ campaign, bringing Bowmore to life in a bold new way but importantly, remaining grounded in our history and roots on Islay. This is the first time we will be exploring Bowmore’s history and craftsmanship with such depth and with such consistency at a global level.

“We believe that Bowmore is a work of art, and our understanding and respect for time is central to how and why we craft our whisky. With this campaign, we will show how Bowmore uses time to transform our celebrated single malt into a true masterpiece. By drawing inspiration from the black rocks surrounding our distillery, we are also paying homage to the way time has shaped not only our whisky, but also Islay itself.”

“The Art of Time” global campaign is launching shortly after Bowmore announced its first collaborative creation with Aston Martin, the Black Bowmore DB5 1964.