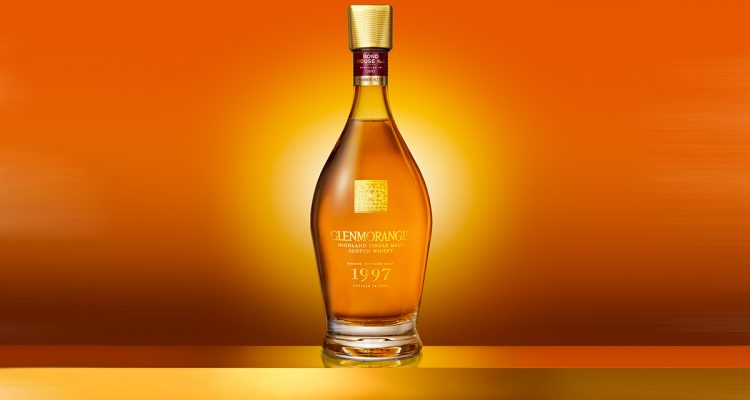 Glenmorangie has unveiled The Grand Vintage Malt 1997. The new offering from the Highland whisky brand was finished in rare Bordeaux wine casks and is the seventh edition in the Bond House No. 1 Collection.

Glenmorangie Grand Vintage Malt 1997 was initially mature in ex-bourbon casks for 10 years, and then finished for 13 years in rare red wine casks from Château Montrose from the appellation Saint-Estèphe in Bordeaux. The vintage bottling was rounded off by the combination with whisky matured exclusively in ex-Bourbon casks and Scotch from ex-Oloroso sherry casks.

“The Glenmorangie Grand Vintage 1997 is dramatically different: lively with aromas of red berries, seductive spice, melting marzipan and floral notes,” noted Dr. Bill Lumsden, Director of Whisky Creation at Glenmorangie. “Inspired by my dream of expressive single malts and in the spirit of the kaleidoscopic style of Glenmorangie.”

On the nose, the whisky offers floral notes of roses, jasmine and cloves mixed with aromas of red berries, mint toffee, pastries or cakes and top notes of sweets. The palate offers a slightly tingling, gently spicy taste, which is followed by a symphony of sweet candy flavors, red berry fruits with pineapple and pear and mandarin wedges in fruit jelly, along with notes of ginger and chilli, fine marzipan, and candied apples. The finish is described as, “sweet, rich, long and gently spicy.”

Glenmorangie’s premium Bond House No. 1 series takes its name from the largest of the 19th-century Bonded Warehouses. Grand Vintage Malt 1997 is priced at $900 and can be purchased via Clos 19.

In April, Glenmorangie unveiled Sonoma-Cutrer Reserve whisky, a limited edition 25-year-old single malt finished in Chardonnay wine casks from California’s Sonoma Valley. Just 1,000 bottles of the Scotch have been created, and is described as one of the Highland distillery’s “most rare and unique creations.”

Earlier in April, Glenmorangie debuted X, a new “sweeter, richer” Scotch. The single malt whisky was designed by the Highland brand to be mixed.